Nebraska returned to its script for success during the 2003 season last Saturday, using a power running game and an opportunistic defense to post a 24-3 victory over Kansas in Lawrence. The victory before a sold-out KU Memorial Stadium extended Nebraska’s mastery of the Jayhawks to 35 straight games, the second-longest winning streak against an opponent in Division I-A history.

The Husker defense forced four turnovers in the victory, including three interceptions, while Nebraska ground out 290 rushing yards, including 173 in the second half. Nebraska controlled the early stages of the game with its rushing attack. The Huskers’ opening drive stalled after an untimely penalty, but the NU defense forced Kansas three-and-out on its next series. Nebraska responded by marching 54 yards in 10 plays, capped by a 28-yard David Dyches field goal for a 3-0 lead. 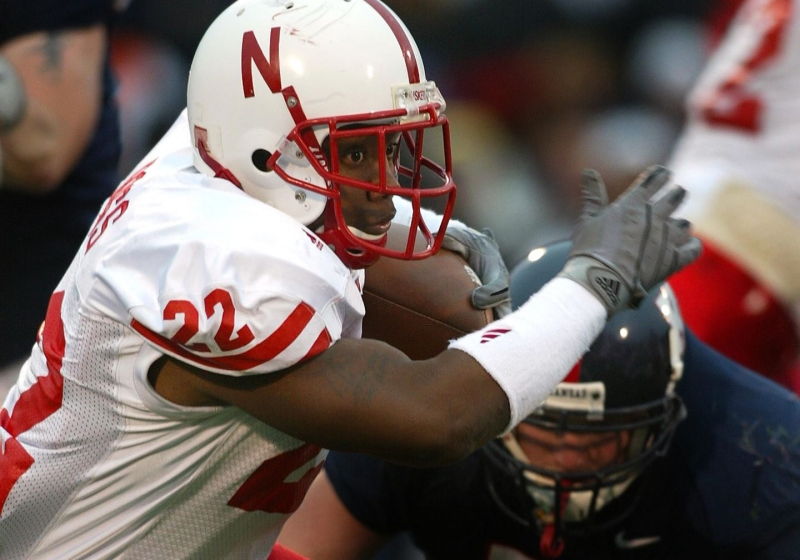 All of Cory Ross’s 108 rushing yards came after halftime. | Courtesy of Nebraska Athletics

Kansas quarterback Adam Barmann was intercepted by Jerrell Pippens on the second play of Kansas’ next possession, and Nebraska converted. The Husker offense marched 58 yards in 10 plays, including nine rushes, with fullback Steve Kriewald covering the final yard for a touchdown and a 10-0 lead. Kansas controlled the clock for the remainder of the second quarter with its ball-control passing game. The Jayhawks got on the board just before halftime on a 20-yard Jerod Brooks field goal to cut NU’s lead to 10-3. The Jayhawks drove inside the Husker 10, but linebacker Demorrio Williams ran down Barmann on third-and-goal to force KU to kick a field goal. The initial Jayhawk kick attempt was blocked by Pippens, but an offside penalty gave KU a second opportunity.

Kansas was poised to tie the game on the first possession of the second half, but NU safety Daniel Bullocks picked off a Barmann pass at the NU 1. Sophomore I-back Cory Ross provided the NU offense with a needed spark, but the Huskers squandered a scoring opportunity of their own, as Kriewald fumbled at the goal line and KU recovered in the end zone. Nebraska wasted no time getting back in the Jayhawk red zone. Josh Bullocks intercepted his nation-leading ninth pass at the Kansas 38, and Nebraska scored four plays later on a four-yard Judd Davies touchdown burst. Davies capped the scoring with a three-yard touchdown with 8:49 to play.

Williams recovered a KU fumble deep in Nebraska territory in the final five minutes for the Huskers’ fourth takeaway of the day. Nebraska limited a high-powered Jayhawk offense to just 292 yards of total offense, while NU finished with 400 total yards, including 108 yards rushing by Ross and 195 yards of total offense by Jammal Lord.