Nebraska’s defense continued its opportunistic ways and the Husker offense used two long touchdowns through the air to post a 38-14 victory at Southern Mississippi on Thursday night.

Nebraska’s win pushed the Huskers to 4-0 this season and marked the fifth time in the past six years Nebraska has won its road opener.

The Huskers wasted no time taking the partisan Golden Eagle crowd out of the game. On the game’s third play nose tackle Ryon Bingham recovered a fumbled USM snap at the 29-yard line, and the Huskers quickly converted. Jammal Lord capped a four-play drive with a six-yard touchdown run to give Nebraska a 7-0 advantage just over three minutes into the game. 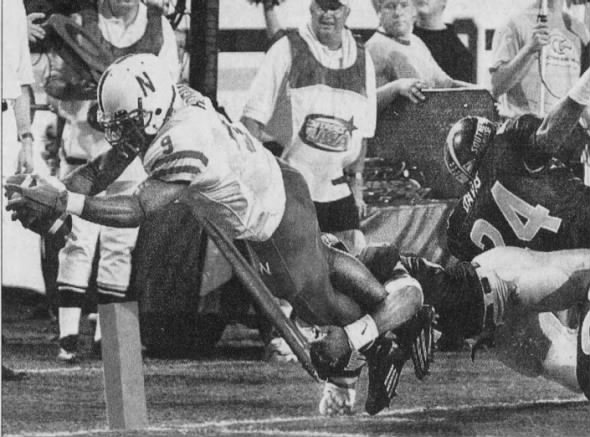 David Horne scores to give Nebraska a 17-0 lead halfway into the first quarter. · The Des Moines Register · Newspapers.com

Nebraska forced a three-and-out on USM’s next possession and after a short Golden Eagle punt began at the USM 43. The Huskers drove inside the 20 before the drive stalled, and freshman placekicker David Dyches connected on his ninth field goal in 10 attempts this season to push the advantage to 10 points.

The score remained 10-0 for just over a minute. Free safety Josh Bullocks intercepted a Dustin Almond pass on USM’s first play of its next drive and returned the ball 41 yards to the 4-yard line. I-back David Horne ran in from three yards out three plays later to give the Huskers a 17-0 advantage midway through the opening quarter.

Southern Mississippi’s defense began to stiffen in the second quarter, and the Golden Eagles cut the lead to 10 points thanks to a big special-teams play. Marvin Young returned a Nebraska punt 37 yards to the Husker 22 and USM scored in four plays to trim the lead to 17-7 shortly before halftime.

The teams traded punts to open the second half, but Nebraska struck quickly on its second drive of the half. Lord connected with split end Ross Pilkington for a 44-yard touchdown on the initial play of the possession to give NU a 24-7 edge. Southern Miss fumbled on the second play of its next drive, and Barrett Ruud recovered at the Golden Eagle 44. The Huskers again capitalized via the deep ball, with Lord hitting redshirt freshman Isaiah Fluellen for a 43-yard touchdown pass on the third play of the drive to give NU a 31-7 edge.

Nebraska’s defense allowed just 144 yards in the first three quarters before Southern Miss gained 175 yards in the final period. The Golden Eagles posted their final points with 2:43 to play to cut the NU lead to 31-14, before Husker I-back Robin Miller capped the scoring with a 47-yard touchdown run with less than two minutes remaining.

The Husker defense forced five Golden Eagle turnovers, including three fumbles and a pair of
interceptions. Nebraska’s passing attack had its most productive outing of the season, finishing with 124 yards, including Lord’s two touchdown passes.