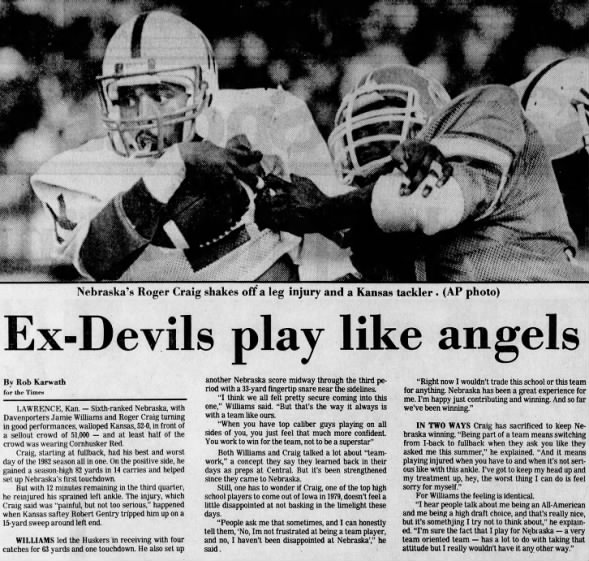 By Rob Karwath for the Times LAWRENCE, Kan. Sixth-ranked Nebraska, with Davenporters Jamie Williams and Roger Craig turning in good performances, walloped Kansas, 52-0, in front of a sellout crowd of 51,000 and at least half of the crowd was wearing Cornhusker Red. Craig, starting at fullback, had his best and worst day of the 1982 season all in one. On the positive side, he gained a season-high 82 yards in 14 carries and helped set up Nebraska’s first touchdown. But with 12 minutes remaining in the third quarteri he reinjured his sprained left ankle. The injury, which Craig said was “painful, but not too serious,” happened when Kansas saftey Robert Gentry tripped him up on a 15-yard sweep around left end. WILLIAMS led the Huskers in receiving with four catches for 63 yards and one touchdown. He also set up another Nebraska score midway through the third period with a 33-yard fingertip snare near the sidelines. “I think we all felt pretty secure coming into this one,” Williams said. “But that’s the way it always is with a team like ours. “When you have top caliber guys playing on all sides of you, you just feel that much more confident. You work to win for the team, not to be a superstar” Both Williams and Craig talked a lot about “teamwork,” a concept they say they learned back in their days as preps at Central. But it’s been strengthened since they came to Nebraska. Still, one has to wonder if Craig, one of the top high school players to come out of Iowa in 1979, doesn’t feel a little disappointed at not basking in the limelight these days. “People ask me that sometimes, and I can honestly tell them, No, Im not frustrated at being a team player, and no, I haven’t been disappointed at Nebraska’,” he said. “Right now I wouldn’t trade this school or this team for anything. Nebraska has been a great experience for me. I’m happy just contributing and winning. And so far we’ve been winning.” IN TWO WAYS Craig has sacrificed to keep Nebraska whining. “Being part of a team means switching from I-back to fullback when they ask you like they asked me this summer,” he explained. “And it means playing injured when you have to and when it’s not serious like with this ankle. I’ve got to keep my head up and my treatment up, hey, the worst thing I can do is feel sorry for myself .” For Williams the feeling is identical “I hear people talk about me being an All-American and me being a high draft choice, and that’s really nice, but it’s somethjing I try not to think about,” he explained. “I’m sure the fact that I play for Nebraska a very team oriented team has a lot to do with taking that attitude but I really wouldn’t have it any other way.”