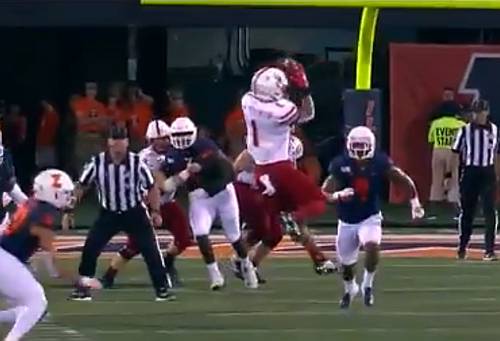 • Nebraska’s victory in tonight’s game is the 900th in the 130-year history of the Nebraska football program. Nebraska joins Michigan, Ohio State, Alabama and Texas in the 900-win club.

• Nebraska scored 42 points in tonight’s mark marking its fourth straight game topping 30 points to open the season. This is the first time since 2014 Nebraska has topped 30 points in the first four games.

• With the win, Scott Frost-coached teams improved to 20-0 when scoring 35 or more points.

• Nebraska trailed by 14 points three times, the last at 35-21 late in the third quarter, before rallying to win. Tonight marked the first time Nebraska rallied from 14 or more points down since a 37-29 victory over UCLA in the 2015 Foster Farms Bowl.

• Nebraska tallied a season-high 690 yards of total offense, surpassing the 525 yards last week against Northern Illinois. This marks the second straight year Nebraska has tallied more than 600 yards against Illinois. The 690 yards of total offense is the most for Nebraska against a conference opponent since rolling up 710 yards against Kansas State in 2007.

• Nebraska finished with 327 yards passing and 363 yards rushing, marking just the second time in school history that the Huskers have both passed and rushed for 300 yards in the same game. The only previous occurrence was Sept. 21, 2013, against South Dakota State, when NU totaled 335 rushing yards and 310 passing yards.

• With his seven receptions, Spielman increased his career total to 139, moving up two spots to sixth on the Nebraska career receptions list. He passed Marlon Lucky (135) and Terrence Nunn (136) in tonight’s game.

• In Martinez’s last six road games dating back to last season, Martinez is averaging 367.3 yards of total offense. In those games, Martinez has rushed 100 times for 426 with six touchdowns. He has completed 135-of-208 passes for 1,778 yards and 11 touchdowns.

• Nebraska junior tight end Jack Stoll caught a six-yard touchdown pass in the first quarter, marking his first touchdown reception of the season and the sixth of his career.

• Senior defensive back Lamar Jackson finished with three tackles including two tackles for loss. His two TFL ties his career high (also vs. Fresno State, 2016). Jackson also added two pass breakups and has six breakups in his past two games.

• Junior safety Marquel Dismuke had three pass breakups in the game, the first three breakups of his career. The breakups came on the second-, third- and fourth-down plays on Illinois’ final drive with the Illini trailing by four. Dismuke also led Nebraska with seven tackles.