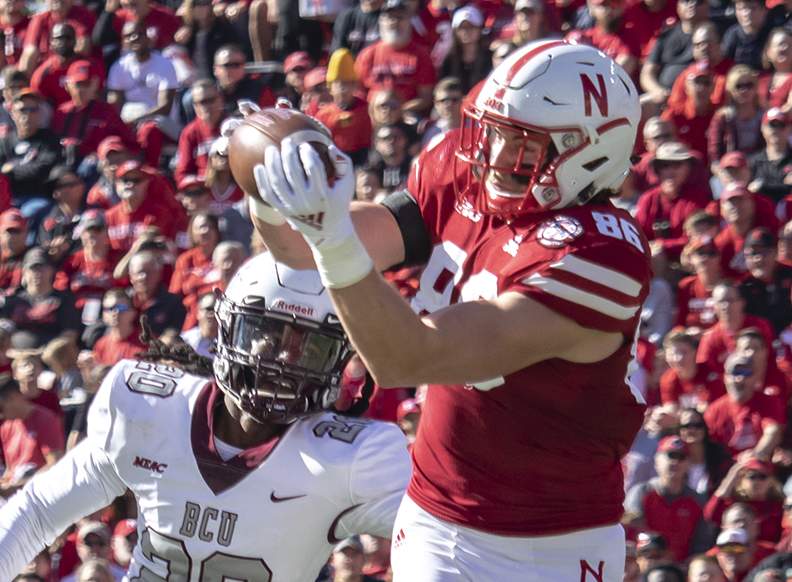 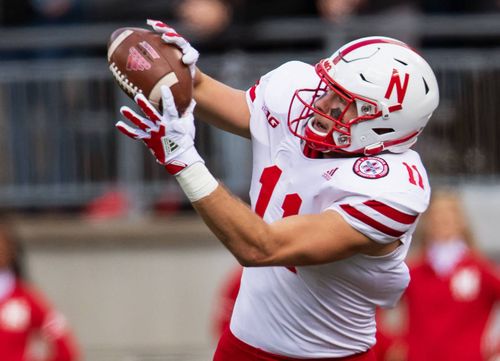 Courtesy of Huskers.com
Austin Allen's reception at Ohio State in 2018 gains 41 yards.
By Jeremy Pernell on 8/25/2019
The tight end room didn’t lose a single player from last year and won’t after this upcoming season, either. Sean Beckton’s group is deep and talented. It’s full of big-bodied guys who move well and present tough matchups for linebackers in coverage. The longevity of the room has helped Beckton groom his guys over the past two offseasons. Guys have had a chance to work with Zach Duval to get their bodies where they need to be. Now it’s time they took a big step in production. Scott Frost would like to use his tight ends more, and they could really help to replace the 1,004 yards Stanley Morgan leaves behind.

Jack Stoll started all 12 games last season, finishing fifth on the team with 21 receptions totaling 245 yards and three touchdowns. The 6-foot-4, 260-pound junior firmly established himself as the leader in the room. The Colorado native has worked on his perimeter blocking and you could see a steady improvement as last season wore on. For the second year in a row, Stoll was named to the John Mackey Award watch list, which goes to the nation’s top tight end. After an offseason getting more comfortable in the offense and building a better rapport with Adrian Martinez, coaches are expecting a pretty significant jump in his production.

Husker coaches are really high on former Aurora standout Austin Allen. When the redshirt sophomore first arrived on campus, he was listed at 210 pounds. He’s now up to 250, and at 6-foot-8, he’s the sort of matchup nightmare that this offense loves to utilize. Beckton has commented on how much stronger and more physical Allen has gotten over the past year, and he’s grabbed that No. 2 job this summer. Nebraska has been using a lot more two-tight end sets this spring and summer, so you can expect Allen to make an impact.

Last season, redshirt sophomore Kurt Rafdal was basically co-No. 2 on the depth chart with Allen and saw roughly the same number of snaps (160) as Allen (201). While Allen has distanced himself a bit, coaches are still excited about his potential and what he could bring to the offense. The 6-foot-7, 245-pounder is still trying to increase his strength and his perimeter blocking is a work-in-progress. He’s shown flashes as a receiver and could get some opportunities this fall.

Trying to break into the rotation will be Katerian LeGrone, who is coming off a redshirt season. The 6-foot-3, 245-pound LeGrone appeared in three games last year and recorded one catch for 8 yards. The Georgia native was one of the first UCF commitments the staff reached back to after taking the Nebraska job. According to Beckton, LeGrone has spent the year reshaping his body and gaining a better understanding of the offense. Can he take some snaps from Rafdal this fall?

The Huskers signed Chris Hickman out of Omaha Burke to add to the room. The 6-foot-6, 215-pound Hickman enrolled in January but was unable to participate in spring ball after undergoing offseason shoulder surgery to correct an issue left over from high school. Ranked as a four-star prospect and the No. 6 H-back in the 2019 class by ESPN, Hickman has drawn comparisons to fellow Omaha native and former Iowa standout Noah Fant. Hickman will redshirt this season while he begins the process of adding bulk and strength. He might have the highest ceiling in the room and has the potential to be an All-Big Ten caliber player in a couple years.

With a couple scholarships still available coming out of spring, Nebraska kept an eye on the transfer portal for talent that could bolster the roster. On May 28, they hosted Travis Vokolek on a visit. The former Rutgers tight end had entered the NCAA transfer portal in April after the Scarlet Knights concluded spring practice. Originally from Springfield, Missouri, Travis’s father, D.J. Vokolek, is a native of Lincoln and played linebacker at the University of Nebraska-Kearney. After his playing days at UNK, the elder Vokolek began his coaching career at Wayne State and Nebraska-Omaha and is currently the assistant head coach at Northern Iowa. He worked with Mario Verduzco and Erik Chinander at UNI in the mid-2000s.

The 6-foot-6, 250-pound Vokolek received heavy interest from Arkansas and also visited Iowa and Kansas State, his other transfer finalists. He appeared in seven games as a true freshman for Rutgers (two starts), then played in all 12 games last season with seven starts. Vokolek was expected to be the Scarlet Knights’ top tight end, and potentially their top receiving target, prior to his decision to transfer. He has not used his redshirt, so he’ll have three years to play two. Despite having to sit the upcoming season, the staff included Vokolek on their 110-man roster to start fall camp. They wanted to give him a head start on the acclimation process, while giving the defense a good look at a Big Ten tight end. There is a possibility Vokolek could be a blueshirt, since his visit to Nebraska wasn’t an official, and he didn’t have a recruitment triggered by the Huskers. If that’s the course the staff takes, Vokolek could end up receiving a scholarship after enrolling in classes and then be counted towards the 2020 class.

Nebraska needs this position group to step up and play up to its potential. They need to improve their consistency and effectiveness as perimeter blockers, while also finding ways to make themselves viable passing targets. Frost would love to see the production out of this group double from a year ago. Last season, Stoll, Rafdal and Allen combined for just 28 catches for 374 yards and 3 touchdowns. Compare that to what he got from UCF in 2017: 55 receptions for 858 yards and 5 touchdowns. Position Grade: B-