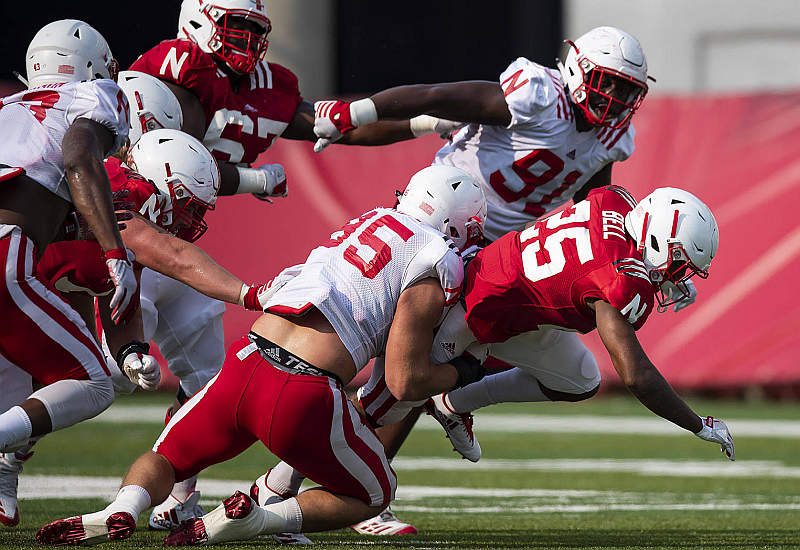 Courtesy of Nebraska Athletics
Greg Bell is brought down during a fall camp scrimmage on Aug. 12, 2018. 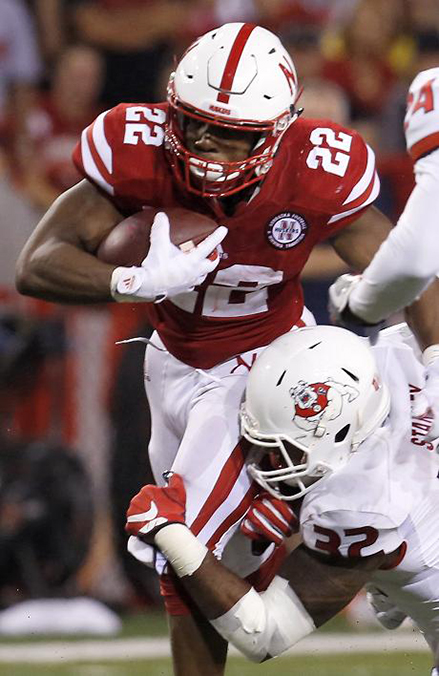 Bruce Thorson-USA TODAY Sports
Devine Ozigbo tries to shed a tackle.
By Jeremy Pernell on 8/25/2018
Nebraska has work to do at running back. The team didn’t rush the ball well last year, to put it nicely. The Huskers are coming off a season in which it ranked 120th nationally in rushing yards per game (107.5) and 112th on a per-carry basis (3.5). Nebraska had just one run by a back that covered more than 30 yards in 2017.Surprisingly, the coaches are quite happy with the room as they head into the season. The optimism seems to be two-pronged. The staff has been very impressed by newcomers Greg Bell and Maurice Washington, while also being encouraged by the continued development of the offensive line through fall camp. They were hoping Tre Bryant would be available to provide what he could, but yesterday Scott Frost announced Bryant was retiring from football. “He just has bone on bone to some degree in both of them,” Frost said. “We were going to try to keep him on a pitch count and only give him so many reps in practice and so many reps in the game. … Without saying too much, he talks about going home and not being able to sleep at night because of aching and pain in there.” It’s unfortunate. Bryant showed All-Big Ten ability early last year before his right knee gave way against Oregon. You gotta feel for the kid.

The guy who will get the majority of the carries, presumably, is junior college transfer Greg Bell, who has been on campus since January. The 6-foot, 205-pound Bell was ranked the No. 1 juco running back in the country. The two-time NJCAA first-team All-American enjoyed a strong spring and has carried that momentum into fall camp. The new staff didn’t bring the heralded transfer to Lincoln to watch from the sideline. Bell gets downhill in a hurry and quickly through the first line of defense. He’s a confident back who has shown the work ethic to further develop his all-around game.

The No. 2 back might end up being true freshman Maurice Washington. Rated the No. 93 overall prospect in the country and the nation’s fifth-best running back by ESPN, Washington has burst onto the scene in Lincoln after questions lingered this offseason regarding his impending eligibility. There had been consistent media chatter about Washington potentially needing an academic redshirt. Many wondered if perhaps he would have to take an academic redshirt or even enroll in a junior college as a nonqualifier. Washington attended three high schools in three years, finished work for his diploma after his senior year and retook the ACT on July 14 – the final test date. He received news on August 1 – two days before the start of fall camp – that not only was he accepted into school, but he was fully qualified and could compete immediately.

The 6-foot-1 Washington, who played his senior year at 190-pounds, saw his weight drop to 170 as he turned his focus to gaining eligibility. That didn’t stop him from immediately turning heads. “Maurice has done an incredible job, coming in late, not really having the summer to get in shape and go through the playbook. He’s special,” said offensive coordinator Troy Walters. “When he’s out there, he has another gear. He has some instincts that you just don’t coach. Guys have it or they don’t, and he has it.”

It probably shouldn’t come as a surprise that Washington has come in and stood out. He was named MVP of the Under Armour All-America Game, after totaling 159 all-purpose yards and scoring a record three touchdowns. The entire week of practices leading up to the game, Washington was regarded as one of the best overall talents among some of the best players in the nation. When you’re the cream that rises to the top among talent like that, it says something. “I’d say to this point he’s better than what I expected,” Frost said. “He’s going to be a pretty special player…”He’s definitely opening some eyes. I think he’s got a bright future here.”

Coaches have said they will look to play three or four running backs in a game to keep bodies fresh and the pressure on defenses. That jives with what they did last season at Central Florida, where Frost gave at least 26 carries to four running backs. Based on comments made during fall camp by running backs coach Ryan Held, Devine Ozigbo has separated himself from some of the other contenders and should expect to be in that mix. The 6-foot, 235-pound senior is in the best shape of his career and has displayed a burst and breakaway speed not yet seen from him. Ozigbo will likely be called upon as a short yardage and change of pace back.

It’ll be interesting to see if promising sophomore Jaylin Bradley can crack the rotation. One of the most decorated running backs in state history, the record-setter out of Bellevue West tantalized fans when he finally got an opportunity last October, gaining 73 yards on 10 carries against Purdue. Bradley played sporadically as a freshman, amassing just 93 yards on 24 carries last season, with four catches for 38 yards in the receiving game. Part of that had to do with dealing with a late season injury. He was heavily recruited by Frost while he was at UCF, so the fit in this offense figures to be a natural one. Bradley is one of several players who enjoyed tremendous gains during his first offseason with Zach Duval. The 6-footer is reportedly up to 210, from the 189 pounds he weighed as a freshman. He has a good blend of size, speed and elusiveness. It’s a stacked room, so his time might have to wait, but he seems to have a bright future.

Where does Mikale Wilbon fit with all of this? The senior out of Chicago will be playing for his third head coach this season. The former four-star recruit teased with his potential after being named Offensive Scout Team MVP during his redshirt season. The 5-foot-9, 220-pound Wilbon has appeared in 25 career games, with seven starts, but has never distinguished himself. It’s doubtful he does so now.

In doing my annual position breakdown, I’ve considered adding a ‘Duck-R’ classification. After all, the Duck-R position is quite important to this offense and can be a real wildcard to keep defenses off balance. “That’s such a good position in this offense if you can find the right guys to do it,” explained Ryan Held. “One time they are in the backfield, one time at receiver, one time its empty and we motion the back in. So, you can really mess with the defense when that position is the caliber of a guy that can get in space and make a guy miss.” The ability to play the Duck-R spot in Frost’s offense is paramount to the schemes versatility.

Eh, maybe next year. Instead, I’ve decided to include Miles Jones with the running backs. The freshman out of Miramar was recruited specifically with the Duck-R position in mind, but has been seeing more time in the backfield as of late. Frost plans to use Jones much the same way he did former Oregon standout De’Anthony Thomas and Otis Anderson, who was a versatile freshman this past season for UCF. Finding a player with Jones’ skill set was a top priority for Nebraska’s staff in its first recruiting class in Lincoln. They were very high on Jones during the recruiting process and have not been shy about naming him as someone to watch heading into fall.

The 5-foot-8, 175-pound Jones was the offensive focal point and do-it-all player for powerhouse American Heritage High School. He is a dynamic athlete who shows excellent burst, short area quickness and outstanding top-end speed. Jones is a track star and was part of a 4×100 relay team that set a Florida state record at 40.31-seconds. His vision, change of direction and overall elusiveness make him dangerous with the ball in his hands. Jones was nicked up a bit early in camp, but has enjoyed a strong finish to August according to coaches. It’ll be interesting to see how much playing time he gets as a true freshman, considering the staff will also use JD Spielman and Tyjon Lindsey in the same role at times. With the new rule allowing players to participate in up to four games and preserve their redshirt, Jones will likely be utilized inside that window.

It was announced yesterday that junior Wyatt Mazour would be put on scholarship. The 5-foot-9, 200-pounder out of Boone Central in Albion has been getting looks in the Duck-R as well and could earn some reps this season. Position Grade: B