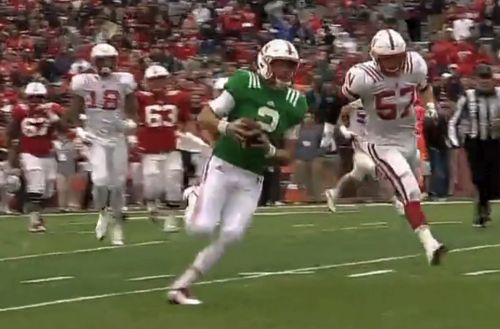 By Jeremy Pernell on 8/24/2018
Following spring, I did an extensive write-up about the impending quarterback competition. If you missed it or would like to browse it again, you can do so here.

Really, not much has changed since then. We have long suspected it would be a two-horse race between redshirt freshman Tristan Gebbia and true freshman Adrian Martinez. Halfway through fall camp, Scott Frost and Mario Verduzco confirmed those two had indeed separated themselves from sophomore walk-on Andrew Bunch. A starter still hasn’t been named and I wouldn’t expect Frost to announce one until game week.

The media has had limited access to practices, and for the handful they have seen, they are given 30-40 minutes of mostly warm-up drills and some position-specific action. From what coaches have said, the competition between Gebbia and Martinez is as close as we expected it would be. The two of them have reportedly traded having better days throughout fall camp. “Right now, if we had to play a game today, both guys deserve to play,” Frost said after an Aug. 17 scrimmage in Memorial Stadium. Regardless of who starts, signs seem to be pointing towards both getting reps against Akron. I think that’s the right way to approach it as well. Nebraska should have the game well in hand at some point in the 3rd quarter. If the competition is as close as we are led to believe, getting them both live reps in a game only makes sense. If it’s close, the deciding factor should come when the bullets are flying and these two need to produce when it matters.

Frost’s offense is built to allow his players to process quickly and play fast. For his quarterback, nothing is more important than the ability to quickly process information before and after the snap. The scheme relies on multiple-option package plays that require a quarterback to read the defense after the snap and quickly identify the best decision to make among a variety of choices, including run or pass. “He has to be one step ahead of what’s going on on the field and make plays,” Frost explained. “I’ve seen a lot of talented quarterbacks in this scheme that couldn’t do it because their wheels just didn’t turn fast enough.” The way that the offense is built should help young quarterbacks be more effective earlier in their careers. But at the same time, it doesn’t figure to all come immediately. As much as Scott Frost’s staff quickly improved Central Florida, it wasn’t like UCF just took off on offense in Year 1. While starting a freshman quarterback and getting used to a new system (sound familiar?), the Knights averaged 4.68 yards per play in 2016, which actually ranked 123rd of 128 teams. Last season in Year 2, that average was 7.46, ranking second. UCF ranked 66th in scoring offense (28.8) in Year 1 before leading the nation (48.2) in Year 2. That’s just a quick reminder that even with all the hype surrounding the new staff, time to build is both necessary and expected.

Another thing to keep in mind: Whoever wins the starting job will face better defenses than McKenzie Milton did in the AAC and Marcus Mariota and Vernon Adams did in the Pac-12. The Big Ten had seven of the nation’s top-20 scoring defenses last season. Nebraska will play six of them this season while they prepare to maneuver through the toughest schedule in the country. Those things can’t be overlooked, even if the optimism that comes with fall camp is more abundant than it has been for almost 20-years.

So who starts against Akron? Every Husker fan has an opinion on this one. All things being relatively even, I continue to lean towards starting Adrian Martinez. I say that while also believing Tristan Gebbia can operate this offense effectively, and probably has a slight leg-up in terms of accuracy and efficiency. Those two things might be a deciding factor for Gebbia. “Really it comes down to who’s going to operate our offense most efficiently,” Frost said during fall camp. “We have enough weapons on offense that, I think, if we have a quarterback who played well, and efficiently and got the ball to the right guy on time, we can be pretty dangerous on offense.” From everything we’ve come to expect after the praises of the last two staffs, that seems to point towards Gebbia.

Martinez, on the other hand, has shown some rust after not playing his senior year recovering from shoulder surgery in March (2017) to repair a torn labrum. “Adrian is great at times, and other times he looks like it’s moving a little too fast for him,” Frost said of Martinez. “He’s got to pick up his pace physically and mentally. At times it’s tremendous. At other times, when he’s not quite sure, he’s a little tentative. That’s the case of every quarterback that you get, particularly in this scheme. I just want to see him turn corners and keep making improvements.” Frost isn’t going to reveal too much, but doing some reading between the lines here, it sounds like Gebbia is probably a little more consistent, which is to be expected. Gebbia is probably more ready to be a game manager who makes the better decisions and least amount of mistakes. Gebbia made an apt analogy during an interview midway through camp. “We’ve got quarterbacks that will basically be point guards,” he said. “That’s what we know: Get the ball to playmakers. Stan makes great plays. JD (Spielman) makes great plays. Don’t do too much, just play your game.” It sounds like something he’s regurgitating from what he’s heard from Frost and Verduzco.

Yet, I can’t help but go back to Martinez’s potential. He’s the future at the position. This staffs hand-picked recruit. A guy they think fits perfectly in this system. With a rebuilding year that you want to use to lay the foundation for the future, I personally look at all the evidence of improvement Frost’s teams make in Year 2 and believe Martinez – and Nebraska – would be better off getting those reps in Year 1.

I’d love to be a fly on the wall when Frost, Verduzco and Troy Walters are sitting down and going through their pros and cons list regarding these guys. With the 6-foot-2, 195-pound Gebbia, I think you could expect at least 6-8 more percentage points in your completion percentage. I think you might even expect 5-7 less turnovers out of Gebbia than you would Martinez. But the end game is ultimately finding a guy who can run this high-octane, fast-paced spread system the way Milton did at Central Florida and Mariota did at Oregon. That’s the apex. This offense needs a quarterback who can read a defense on the fly and take advantage of the defensive weaknesses this scheme uncovers. Gebbia can do that, but he doesn’t add the element with his legs that the 6-foot-2, 220-pound Martinez does. Gebbia has displayed the better arm and has shown to be effective with the intermediate passing game, a very important aspect of this offense. That can’t be overlooked, but that’s also not to say Martinez isn’t a good passer himself. Quite the contrary.

We’ve heard how effective Gebbia is as a runner, and we saw a bit of that in the spring game. But Martinez is special in this area, and the way he deftly handles the read aspects of the offense puts him in another category. Sure, Gebbia can hit a seem or keep on a zone-read and pick up 5-7 yards, but Martinez has the ability to pick up 20 yards or more in the same situations. The threat he would provide in the zone-read and RPO aspects of this offense – a huge piece of the scheme – would trickle down to the rest of the skill position players. The extra attention the defense would have to give to Martinez would cause the sort of split-second hesitation that would open up big gains from guys like Greg Bell and Maurice Washington. It could be the difference between running backs getting 5-7 yards and breaking off bigger chunks because the defense has to account for Martinez. Gebbia is an astute quarterback. I have no doubt he is more than capable of running this offense and winning games at Nebraska. What it boils down to, for me, is that I believe his ceiling in this offense is an 8 (on a scale of 1-10), while Martinez represents a 10.

I would bet that it’s Gebbia who starts against Akron, but I think at some point Martinez takes over. Whether it’s because the team is sitting around .500 in late October, or Gebbia isn’t producing the way coaches would like, I can’t say for sure. Just how I see it unfolding. Position Grade: C+

Prior to contributing to HuskerMax, Jeremy Pernell co-founded the all-football website N2FL. com. From 2002-2014, he served as the editor in chief of the college football portion of the website which focused heavily on talent evaluation, which included NCAA recruiting and the NFL Draft. He has analyzed and covered the NCAA and NFL for 25-years. You can email him at jgpernell@comcast.net