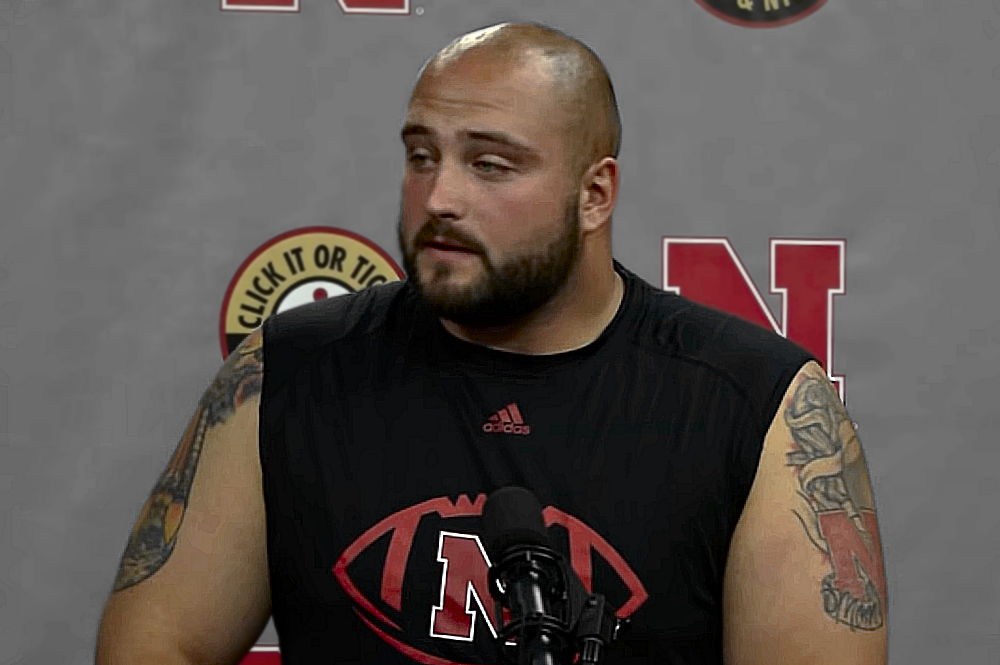 Tanner Farmer
By Jeremy Pernell on 8/27/2018
Nebraska’s offensive line was one of the more criticized position groups on the team last season, and for good reason. It was a leading reason for the program’s downfall under Mike Riley. The 2017 Husker line paved the way for only 107.5 rushing yards per game, ranking 120th nationally. On a per-carry basis, the line only gained 3.5 yards per carry, ranking 112th. Ugh. Arguably no position group will determine Nebraska’s success or failure in 2018 as much as the offensive line. Former offensive line coach Mike Cavanaugh found talent for that group, but he just didn’t develop it well enough. It would seem the Huskers have the guy in place now to make that happen. Greg Austin was recently named to ESPN’s “40 under 40.” It’s their annual roundup of the 40 best coaches in the country under the age of 40. The list consists of head coaches, coordinators and position coaches.

Frost and Austin have said this system will do a lot of favors for the offensive line. They comment about the tempo they play with wearing down defenses. It keeps defenders on their toes. Oregon and UCF typically saw simpler schemes because it’s difficult for a defense to line up in a lot of complicated looks and blitzes when this offense is moving like it wants. It’s going to be an adjustment for the line. These guys are going to be asked to do a lot more moving then they were under Riley. All five of them will be asked to pull and cover some serious ground over the span of a few plays. You might see a backside tackle pull on one play, and both guards pull on another. One of the biggest transitions for this line is learning to “play between the whistles” as coach Austin likes to say. That means linemen have to quickly process information and react on the field within the handful of seconds between snaps. Those guys need to be mentally in tune to what the defense might be bringing next.

The bottom line: If Nebraska wants to return to some semblance of the program they were when Scott Frost was playing, the ‘Pipeline’ needs to get back to their old mindset of being dominant up front, setting the tempo, being nasty, physical. Coaches seem happy with the progress the line has made this offseason. There’s plenty of experience returning, all five of Nebraska’s projected starters played at least 275 snaps last season. During the BTN Bus Tour on Aug. 18, Gerry DiNardo tweeted out that he felt Nebraska’s offensive line “looked like the Penn State, Michigan State and Michigan lines.” No small praise. Will this group prove him right?

This staff has extremely high hopes for Brenden Jaimes. He joined some rare company last year when he made his first career start four weeks into the season. The 6-foot-6, 300-pounder became just the fifth true freshman in school history to start on the offensive line since 1972, and only the 11th to even play in a game. Jaimes set a Husker record by starting the final nine games at right tackle. He ended up being one of only three freshmen in the Big Ten to start every conference game and was named to the honorable mention All-BTN freshman team for his work. During spring, he moved over to the left side, replacing the departed Nick Gates. Jaimes played left tackle in high school, so the adjustment has been smooth. According to Austin, Jaimes already boasts legitimate NFL potential and will be a crucial piece to Nebraska’s offensive line. “He’s a good player, rangy kid, bouncy guy. I mean, he’s really athletic,” Austin said during spring. “Jaimes is on the right track. If he stays healthy and keeps working hard he could be a very good player for a very long time, even in the NFL.”

At the other end of the line will be sophomore Matt Farniok. The 6-foot-6, 330-pound Farniok played in seven games last year, starting two games at right tackle (Oregon and Northern Illinois) and two games at right guard (Northwestern and Minnesota). A former consensus four-star recruit, Farniok was one of the most celebrated Husker signees in recent recruiting classes. He went through his share of learning bumps last year as a redshirt freshman, but the hope is Farniok is now ready to take the starting right tackle job by the horns and lock it down for the next three seasons. Farniok probably has a higher ceiling at guard, but a lack of tackle depth sort of dictates him playing on the edge. It would be a pretty significant downgrade if either Jaimes or Farniok went down. The two of them staying healthy will be crucial to the o-line’s success and Nebraska’s offense as a whole.

The backup tackles will be junior Christian Gaylord and redshirt freshman Matt Sichterman. Both are former four-star recruits. The 6-foot-6, 310-pound Gaylord will backup Jaimes on the left side. The Kansas native has appeared in 23 games as a Husker, mostly on special teams. Gaylord has struggled with pass blocking since his arrival and continues to fall behind new additions to the room. One of those is the 6-foot-4, 310-pound Sichterman, who is working behind Farniok on the right side and has the higher ceiling.

It would be interesting to see what the staff would do if they needed to replace either tackle. Would Gaylord or Sichterman get the call, or would they move Cole Conrad to tackle? The former walk-on from Fremont, Conrad is the wild card along the line, capable of playing all three positions. In fact, he was the top backup at every position along the line last year. The 6-foot-5, 300-pound Conrad started five games at right tackle in 2016 and made seven starts at center last season. A shoulder injury plagued him throughout the year, leading to surgery in December and being limited in spring. Nebraska hasn’t had consistent, reliable play from the center spot through a full season since Justin Jackson in 2012. In a lot of ways it has directly led to the struggles along the line for the prior two coaching staffs. Is Conrad ready to bring some stability and sound play to that spot?

With Conrad and the now-retired Michael Decker missing spring, Greg Austin was able to give his youngsters some valuable reps. In their absence, redshirt freshman walk-on Hunter Miller spent a lot of time as the No. 1 center. Impressive, considering that first practice of spring ball was his first collegiate practice – ever. He missed last season with a shoulder injury. The 6-foot-4, 325-pound Miller needs to continue to add strength. He is listed as Conrad’s backup, but he is far from being ready to contribute in a meaningful way. He has a ways to go. Also getting valuable reps was true freshman Will Farniok, Matt’s younger brother. The 6-foot-3, 290-pound Farniok benefited greatly from enrolling early at Nebraska. Along with getting significant reps, he was able to go through a full winter conditioning and get a head start on building his body towards Big Ten standards. He’ll certainly redshirt, but might have more potential than Miller and will compete with him to crack the rotation – or start – next season.

If there’s a strength on this offensive line, it’s along the interior. Nebraska has multi-year starters returning at the guard spots. Jerald Foster has started 16 games at left guard the past two years, and last season was named All-Big Ten honorable mention by coaches and media. Foster, who was a team captain in 2017, continues to be a strong leader in that room. The 6-foot-3, 335-pound Foster could help form one of the Big Ten’s best guard tandems. He’ll team up with fellow senior Tanner Farmer. The 6-foot-4, 325-pound Illinois native has started 19 games over the last two years while also battling injuries. Farmer spent time during spring and fall camp cross-training some at center. He initially came to Nebraska as a potential center before settling in at guard.

Nebraska’s best backup lineman is Boe Wilson. The redshirt sophomore has been pushing Farmer at right guard ever since his first fall camp. As a true freshman in 2016, the previous staff was tempted to burn his redshirt when the line was hit by injuries. Just days leading up to the 2016 season it was thought he was going to be the starting left guard. It was ultimately decided to redshirt him and he’s been waiting in the wings ever since. The 6-foot-3, 305-pound Wilson has impressed the new staff as well and has worked his way into playing time. Expect to see him rotate on a regular basis.

Big things are still expected out of Foster’s backup John Raridon as well. The former consensus four-star recruit played in the prestigious Army All-American Game, while being ranked as the No. 2 guard by Scout.com and an honorable-mention Parade All-American. The 6-foot-4, 320-pound sophomore was getting strong reviews as a center – the position he initially was recruited to play – in 2016, but was eventually moved to guard. It’ll be interesting to see what the new staff gets out of him. Nebraska could really use youngsters like Jaimes, Farniok, Wilson and Raridon to take their games to the next level. Their recruiting profiles led you to believe they would be a strong nucleus for this staff in Years 2 and 3 of the Frost era. Position Grade: C+