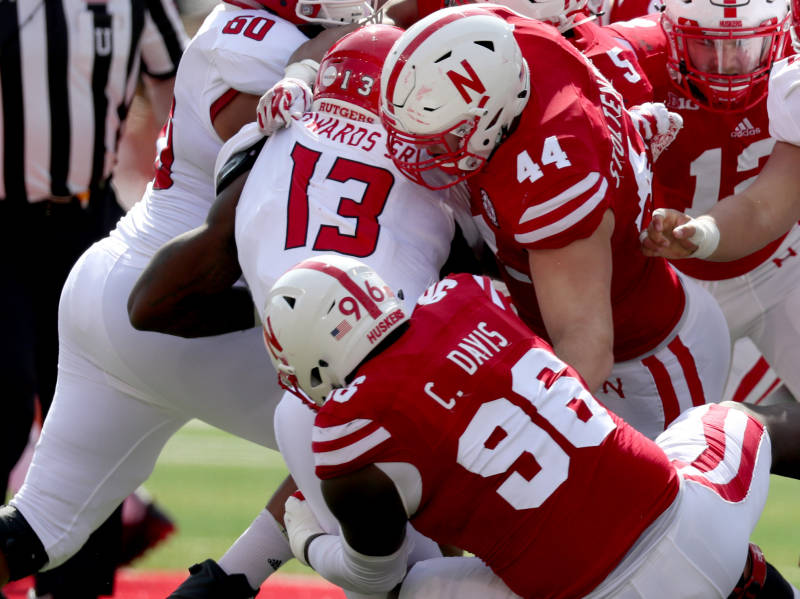 Courtesy of Huskers.com
Carlos Davis and Mick Stoltenberg with a stop.
By Jeremy Pernell on 8/28/2018
The defensive line is a fascinating position group. On paper, it looks as deep as any position on the roster, yet it seems odd to label it a strength until it proves it can be leaps and bounds better than a season ago. You all remember last year, right? With all of the optimism going around, it might feel like ripping off a band-aid to review the sieve-like tendencies of last years defense. After all, Nebraska had the Big Ten’s worst defense a year ago, allowing 6.34 yards per play, 112th in the country. They ranked 119th in 2017 with 14 total sacks. We’ve all seen these stats. Want a couple more gut-punches? There were 130 teams in the FBS last season. Only one of those teams had fewer tackles-for-loss than the 44 the Huskers had over the course of 12 games. According to Football Outsiders, Nebraska’s “stuff rate” was 12.8 percent. Which means just 12.8 percent of opponents’ carries were stopped at or before the line of scrimmage. That rate ranked last in the nation. How about this one: The defense allowed 9.89 yards per carry last season on third-and-short (1-3 yards). That also ranked last nationally – by two yards.

With all of that, though, there seems to be a lot of confidence among the coaches that this position group is indeed ready to be the backbone of the defense. You can expect a ton of rotating this season. There are several guys capable of providing valuable snaps. The defensive line will be a mix of returning starters and promising youngsters who enjoyed strong springs and are coming off productive fall camps as well.

In a 3-4 defense, it all starts with the nose guard. Senior Mick Stoltenberg has battled injuries throughout his career and missed most of spring with a sore knee. He has appeared in 33 career games with 21 starts, and hopes to be a major factor in his final season in Lincoln. The 6-foot-5, 315-pound Stoltenberg came to Nebraska as a defensive end, but has consistently built up his body and now is one of the more physically imposing players on the team. If he can stay healthy and give the team 50-60 snaps a game, it will go a long way. Behind him will be a couple guys at different points of their Husker career. Damion Daniels could have played last season as a true freshman – former head coach Mike Riley said Daniels was ready, but the decision was made to preserve his redshirt. The 6-foot-2, 340-pounder received rave reviews for his work on the scout team. Daniels reshaped his body during his first full winter conditioning under Zach Duval and seems poised to break out this season. He’s impressed the new staff and looks like the future at NG. He’ll compete with senior Peyton Newell for the 25-35 backup snaps behind Stoltenberg. Newell arrived on campus in 2014 with an impressive recruiting profile. The former four-star recruit chose Nebraska over a reported 33 other scholarship offers, including Clemson, Georgia, Michigan State, Oklahoma, Penn State, USC and Wisconsin to name a few. Up to this point, the 6-foot-3, 300-pound Kansas native has only appeared in seven career games, with just two total tackles and hadn’t made a travel roster until last year. Newell is on his third head coach and fourth position coach, but Mike Dawson had praised Newell for having a strong spring and his play in fall camp has him lined up for meaningful snaps for the first time in his career.

Where does this leave Utah transfer Vaha Vainuku? The 6-foot-3, 325-pound Vainuku took an interesting route to Nebraska. He graduated as part of the 2012 class, before serving an LDS mission during the 2012-13 seasons. He then grayshirted during the 2014 season and joined Utah’s program in 2015, where he redshirted after suffering a Lisfranc fracture, tearing two ligaments in his right foot. He had two surgeries, but wasn’t the same. Although Vainuku came to Utah as a defensive lineman, he played on the offensive side in 2016 out of necessity, appearing in two games as a reserve guard. He ended up retiring in the spring of 2017 because of lingering effects of the Lisfranc fracture. He continued his studies at Utah on a medical hardship and received a bachelor’s degree this past spring. This past April, when his foot began feeling better, Vainuku reached out to his old high school coach. College coaches were coming through Salt Lake City in the spring evaluating prospects, and Vainuku asked if his coach would pass along his name to assistants coming through. Nebraska defensive coordinator Erik Chinander was one of the coaches who visited East High School and checked in on Vainuku. A campus visit followed less than a week later and on June 1, Vainuku decided to transfer to Nebraska. So how does a player go from accepting a medical scholarship at one school to transferring and playing at another? Vainuku needed to graduate from Utah, then be medically cleared to return to the field by Husker doctors on his visit. Nebraska’s medical staff checked out Vainuku for almost three hours, running a battery of tests. Everything checked out. While at Utah, Vainuku was one of the strongest players on the team, being able to bench press more than 450 pounds. Coaches felt he would be able to play any position across the defensive line. He isn’t listed on the current depth chart, but Vainuku – who turns 25 in October, will have two seasons of eligibility.

There seems to be a lot of depth and talented options at defensive end. Three guys will likely get the bulk of the reps, but another two or three could certainly make their mark this season as well. Senior Freedom Akinmoladun, who came to Nebraska as a tight end recruit, is the veteran of the group. The 6-foot-4, 295-pounder has played in 36 career games and has 29 starts to his credit. He hasn’t really lived up to the hype he created as a redshirt freshman in 2015, when he recorded a team-high 4½ sacks. Many thought he would be Nebraska’s next great pass rusher, but he has only registered five total sacks the past two seasons.

There is a tight battle going on for the other starting defensive end spot. Right now, it seems sophomore Ben Stille has the slightest of edges on junior Carlos Davis. Both have tremendous upsides. The 6-foot-5, 290-pound Stille burst onto the scene last year. He started the year as a defensive end, but was moved to outside linebacker by former defensive coordinator Bob Diaco. The Ashland-Greenwood native didn’t make his debut until Week 4 against Rutgers, but finished the season as the teams leader in TFLs (10) and sacks (3.5) and earned Freshman All-Big Ten honors from the Big Ten Network. In doing so, Stille became the first freshman to lead the Huskers in TFLs since the stats began being tracked (1968) and the first freshman to lead Nebraska in sacks since the stat became official (1981). Frost and his staff moved him back to defensive end shortly after they arrived. The staff has been talking about Stille since the spring and have clearly been impressed by him on many levels. They already praise his leadership and work ethic. He has a very bright future.

The same can be said of Davis. The 6-foot-2, 325-pound Missouri native started all 12 games at defensive end last season. He finished with 42 tackles, four of which were for losses, and 2½ sacks. He also led the team with six quarterback hurries. All despite being handcuffed by a system that asked its linemen to react, rather than attack. He also played in all 13 games and made four starts at defensive tackle in Nebraska’s old 4-3 scheme under Mark Banker. His play earned him honorable-mention All-Big Ten freshman recognition in 2016. I have long felt that Davis has all-conference talent. The new scheme seems to favor his skillset. I think Davis finally shows why so many coaches have been excited about his talent.

There are a couple guys who are battling to get into the defensive end rotation. Sophomore Deontre Thomas skipped a redshirt last season and played out of position as Stoltenberg’s primary backup at NG. The 6-foot-3, 290-pound Thomas appeared in 10 games and showed flashes of promise. He is back playing his ideal position now and knows what it’s like playing at this level, and what’s required to succeed. Nebraska could really use him taking his game to the next level in anticipation of a much larger role heading into 2019 and beyond. They could use the same out of Carlos’ twin brother Khalil Davis. The 6-foot-2, 310-pound Davis has appeared in 24 career games already. Like his brother, he has seen half of his games as a tackle in a 4-3. Both Davis twins have the size and skillset to play all three positions along the defensive line. That versatility should come in handy.

We’ll see if DaiShon Neal can earn some reps. The 6-foot-7, 310-pound Neal has played in 21 games over his first three seasons in the program, working primarily on special teams. The junior from Omaha Central has yet to make a contribution on defense and has just three career tackles. He enjoyed a very strong spring, by all accounts, but it’s going to be an uphill climb to earn a spot in the rotation. He’s sitting behind some guys who are just more talented. If he doesn’t make his move soon, he could be in jeopardy of falling behind a couple freshmen as well. The staff is high on Tate Wildeman and Casey Rogers. The pair are destined for redshirts, but this staff likes what they’ve seen thus far. Position Grade: B-