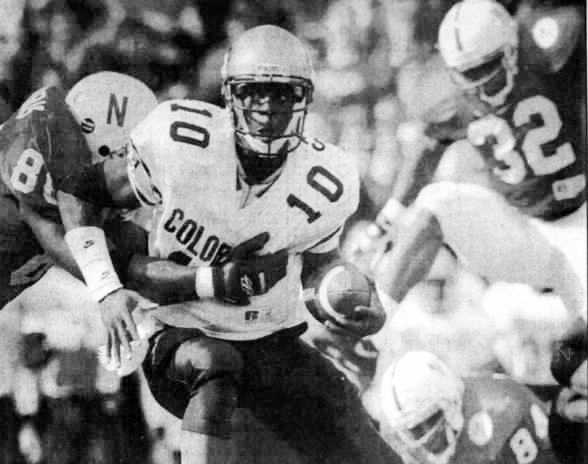 By J. Hudson on 6/3/2020
Colorado quarterback Kordell Stewart was a dual-threat dynamo — except when he faced Nebraska. The Big Red had a way of making “Slash” look like an under-prepared third-stringer.

The Big Eight’s all-time total offense leader with 7,770 yards, Stewart earned first-team all-conference honors as a senior in 1994. The Pittsburgh Steelers selected him in the second round of the 1995 NFL draft.

During his CU career, he ran and passed for 48 touchdowns, but not one of those four dozen scores came against Nebraska. Of his nearly 1,300 career rushing yards, just seven yards — seven! — came during his three outings versus the Cornhuskers from 1992 to ’94.

A statistical look at Stewart’s futility against Nebraska:

True, it makes perfect sense that a player might not hit his averages when facing a quality opponent. But Stewart also fell well short of how a typical quarterback performed against Nebraska. From 1992 through 1994, the Huskers allowed a 50.2% completion rate and a 104.6 passer rating against players not named Kordell Stewart. That means Stewart’s 35.9% and 63.6 were substantially south of run-of-the-mill.

Was the problem in his head? We’ll probably never know.

After the much-anticipated 1994 Colorado-Nebraska game in Lincoln, Stewart said: “The adrenaline and everything was going, but as far as being nervous, no, I wasn’t.”

He credited Nebraska with having “a great defense” and said, “When you get down against them, you get desperate.”

“I’d get my reads,” he continued, “and I thought we had the right plays, but guys couldn’t get open or I’d make a bad throw.”

And then came six words that can be applied to all three of his encounters with the Huskers: