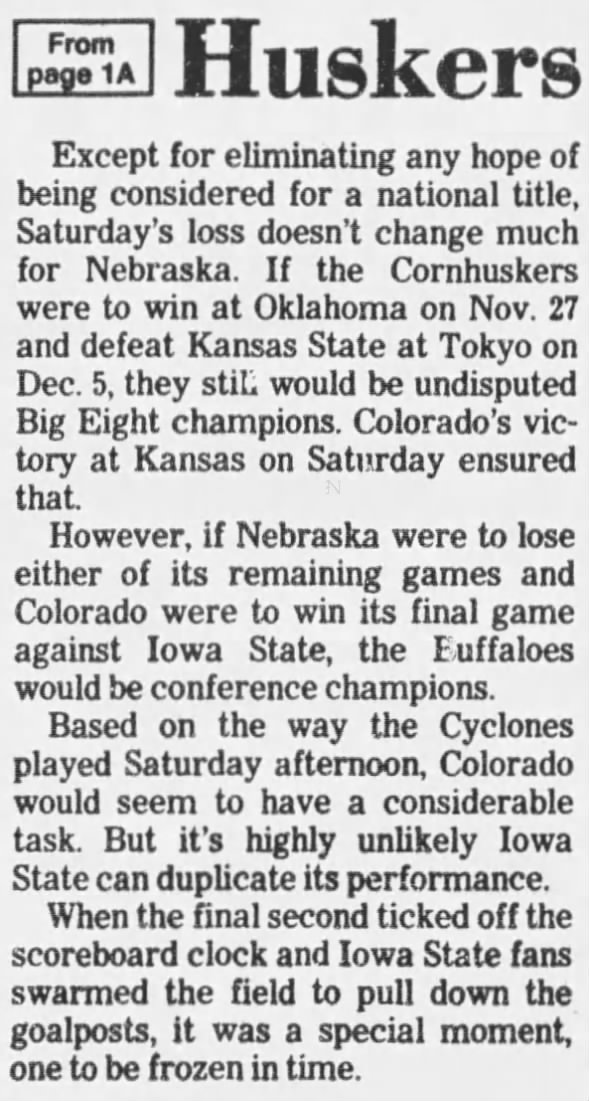 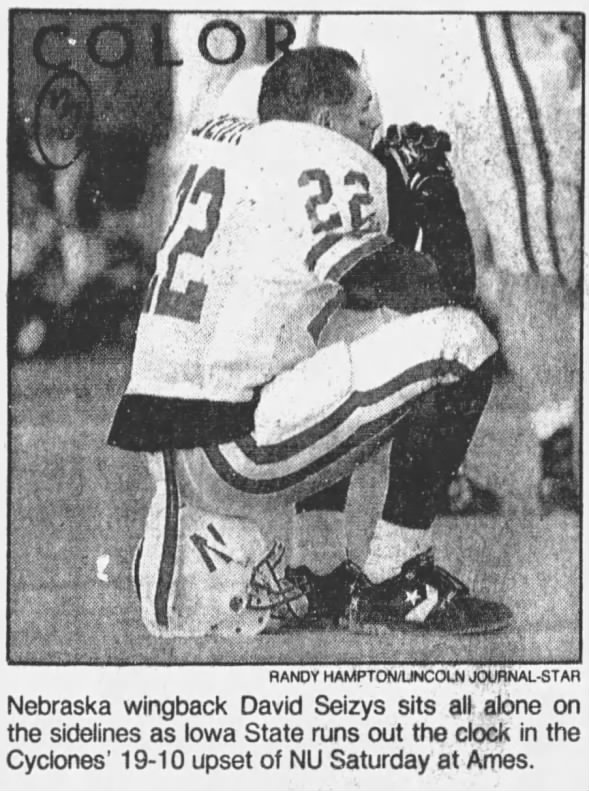 Fired-up Cyclones beat Huskers at own game AMES, Iowa It was a cold Saturday afternoon at Cyclone Stadium-Jack Trice Field, brutally cold for the Nebraska football team. The temperature in the late afternoon was: Iowa State 19, Nebraska 10. As far as the Cornhuskers were concerned, it couldn’t have been much colder than that, even on a warm day, which Saturday certainly wasn’t Vou know the cliche about the nether region freezing over? Well, from Nebraska’s point of view, it finally did here Saturday afternoon. “This is probably the worst loss since I’ve been alive,” said Nebraska center Jim Scott “It’s like one of those pinch-yourself-to-see-if-you’re-awake losses.” Iowa State turned in an effort worth freezing to preserve for future generations of Cyclone fans. It was a cryogenic victory, you could say. “I’ve waited 10 years for this,” Tom Wilson said. Wilson, a native of Falls City and a former assistant to Nebraska strength and conditioning coach Boyd Epley, is Iowa State’s strength coach. He joined the Cyclones in 1983. Most Iowa State fans have had to wait a little longer. The Cyclones’ last victory against Nebraska was in 1977. Wilson was in high school then. Iowa State won straight-up. The victory wasn’t a result of freak plays. The Cyclones played better than a Nebraska team that a week ago, after outscoring Colo- Mike Babcock Sports columnist rado and Kansas in consecutive games by a combined score of 101-14, was being compared with the greatest in school history. Saturday, the Cornhuskers did what no other Tom Os-borne-coached team had done. They lost to a team that will finish the season with a losing record. If Iowa State were to defeat Colorado next Saturday at Boulder, the Cyclones would finish at 5-6. Iowa State, a four-touchdown underdog by most accounts, beat the Cornhuskers at their own game, controlling the line of scrimmage and puzzling Nebraska’s defense with a wishbone offense that gained 373 of its 399 total yards on the ground. Even more remarkable was the fact that the Cyclone offense was directed by Marvin Seiler, a fifth-year senior quarterback who was starting for the first time in an U Stories, photos. Pages 1D, 6P and 1E. Iowa State career that’s one game from being over. Prior to Bob Utter’s being injured three games ago, Seiler was third string. Saturday, he rushed for 144. yards. ‘r Iowa State played without turnovers and with an emotion intensified by its Nebraska connection. The Cyclone roster includes 16 players from Nebraska. Ty Stewart who kicked four field goals, is from Omaha. ‘ Iowa State Coach Jim Walden is a former Cornhusker assistant and Jim Burrow, Iowa State’s defensive backs coach, played at Nebraska. Saturday’s victory was personal for them. In contrast Nebraska lacked emotion, a fact Coach Tom Osborne readily admitted. Given the emotional victories against Colorado and Kansas, that’s probably understandable. But the Cornhuskers should have been good enough anyway to win on form. A week ago, Nebraska had worked its way into the race for the mythical national championship. Now, the Cornhuskers are faced with having to win their last two games to ensure winning the Big Eight and earning a return trip to the Orange Bowl. See HUSKERS on page 8A
From page 1A Huskers Except for eliminating any hope of being considered for a national title, Saturday’s loss doesn’t change much for Nebraska. If the Cornhuskers were to win at Oklahoma on Nov. 27 and defeat Kansas State at Tokyo on Dec. 5, they still would be undisputed Big Eight champions. Colorado’s victory at Kansas on Saturday ensured that However, if Nebraska were to lose either of its remaining games and Colorado were to win its final game against Iowa State, the Buffaloes would be conference champions. Based on the way the Cyclones played Saturday afternoon, Colorado would seem to have a considerable task. But it’s highly unlikely Iowa State can duplicate its performance. When the final second ticked off the scoreboard clock and Iowa State fans swarmed the field to pull down the goalposts, it was a special moment, one to be frozen in time.