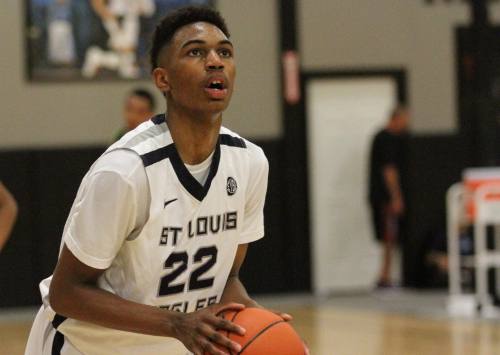 Davis, a 6-foot-5, 185-pound guard, comes to Nebraska after spending his senior year at national power Montverde Academy (Fla.) playing for Coach Kevin Boyle. The team went 35-0 and won the Geico High School Nationals with a 76-58 win over No. 2 University (Fla.) School and a 71-53 win over No. 3 Findlay (Nev.) Prep. Davis is one of nine Division I signees on the Montverde roster, a group that includes four players in ESPN’s Top-100, including RJ Barrett, the No. 1 player in the class of 2018.

“There are a lot of reasons to be excited that Karrington is joining the Husker program,” Miles said. “He’s played for programs which are used to success at a high level and understands what it takes to compete at that level. I’ve been fortunate to watch his development over the years, and I love Karrington’s skill level, shooting and playmaking abilities. He really knows how to play the game.”

Prior to transferring to Montverde for his senior year, he played two seasons of varsity at Chaminade Prep in St Louis for Coach Frank Bennett. In those years, the school went a combined 51-12 with two Class 5 (largest class) state semifinal appearances and a state title in 2016. As a junior, Davis averaged 19 points and six rebounds per game and was a first-team all-state selection by the Missouri Basketball Coaches Association. As a sophomore, he came off the bench for Chaminade, which went 27-5 en route to a state title. He was teammates with 2017 NBA first-round draft pick Jason Tatum and Iowa forward Tyler Cook. Davis played AAU ball for the Bradley Beal Elite in the EYBL in 2017 and also played for the St. Louis Eagles AAU program.

“Karrington was a little under the radar because of an injury last year, but the Huskers got a great kid and a really good player whose best days are ahead of him,” Miles said.

The son of Kendall and Dionne Davis, Karrington looked many schools, including Kansas State, St. Louis, Middle Tennessee, Iowa State and Missouri before selecting Nebraska. He has three younger sisters, including twins Kalynn and Kennedy, and Kabanna.