Lincoln — Quarterback Jammal Lord set a pair of school records, rushing for 218 yards and three scores and accounting for 369 yards of total offense, as Nebraska rolled up 595 yards in a 38-14 victory over McNeese State Saturday.

The junior from Bayonne, N.J., scored on runs of 5, 56 and 57 yards, as the Huskers, who improved to 4-2 on the season, rushed for a season-best 444 yards on the ground and snapped a two-game losing streak. 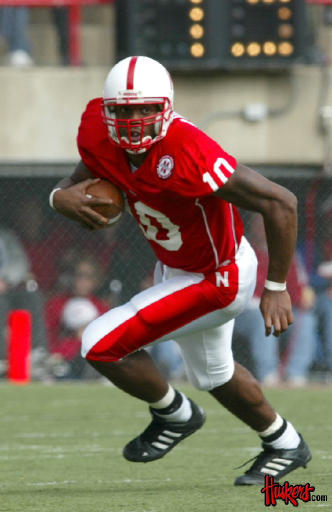 Lord’s rushing total eclipsed the previous NU quarterback record of 191 yards set by Eric Crouch last season in a win over Missouri, while Tommie Frazier rushed for 199 yards in the 1999 Fiesta Bowl against Florida. Lord, who completed eight straight passes in the first half and hit seven different receivers, connected on 12 of 18 passes for 151 yards and a score. He totaled 369 yards of total offense, breaking Crouch’s school mark of 360 set in the loss to Colorado last season.

While Lord guided Nebraska to a season-high yardage total, Husker I-backs David Horne and Dahrran Diedrick accounted for 145 yards, as Horne, a true freshman, had 81 yards on 12 carries in his collegiate debut, while Diedrick finished with 64 yards.

Nebraska’s special teams set up the game’s first touchdown, as DeJuan Groce returned Jason Cook’s punt 21 yards to the McNeese 28. The Huskers needed only four plays to cash in, as Lord scored from five yards to put NU up 7-0 with 6:20 remaining in the first quarter.

The Huskers extended the lead to 14-0 with 12:03 remaining in the half, as NU went 91 yards on nine plays before Lord raced 57 yards untouched for a touchdown. The junior converted a key third-down pass to Ben Cornelsen before breaking his career-long run for the score.

After throwing for a total of seven yards on NU’s first three possessions, Lord guided NU on an eight-play, 68-yard scoring drive to give NU a 21-0 lead. The junior was 4-for-4 for 63 yards through the air, and connected with Troy Hassebroek for a 10-yard touchdown pass.

The Cowboys, who entered Saturday’s game with a 4-0 record and a No. 2 ranking in I-AA, responded on their ensuing possession, as backup quarterback Ryan Corcoran found Marcus Turner for a 43-yard touchdown pass, capping an eight play, 81-yard drive, trimming the Husker lead to 21-7 with 3:03 remaining in the half.

Cocoran completed 6-of-14 passes for 144 yards and a score, but MSU quarterbacks combined for just 16 completions in 35 attempts.

After holding the Cowboys on their subsequent possession, Nebraska needed only one play to extend the lead to 31-7, as true freshman Mark LeFlore took a reverse and went 64 yards for a touchdown. It marked the first time that LeFlore had touched the ball in his Husker career.

McNeese closed to within 31-14 on Marcus Trajan’s one-yard scoring run before Lord’s third scoring run of the afternoon, a 56-yard scamper, provided the final margin.

The Huskers will take on Missouri next Saturday, Oct. 12, at 11:30 a.m. The game will be carried on a pay-per-view basis and fans should call their local cable operator for more information.

Notes: Trevor Johnson, Patrick Kabongo, Daniel Bullocks all made their first career starts on defense against McNeese State … Former All-America center and 2000 Dave Rimington Award winner Dominic Raiola had his jersey retired during halftime ceremonies. He becomes the 15th player to have his jersey retired … Senior wingback Troy Hassebroek was awarded the Brook Berringer Memorial Scholarship prior to today’s game. It is presented annually to a senior player who is active in the community, following in the footsteps of quarterback Brook Berringer, who led the Huskers to national championships in 1994 and 1995 before he was killed in a plane crash on April 18, 1996.