In one of the finest, most exciting and best covered games (hundreds of writers, broadcasters and photographers from all parts of the nation), the Cornhuskers twice came from behind in the second half to pull out a sensational victory and maintain their No. 1 national ranking.

No. 2 ranked Oklahoma, led by a great quarterbacking job from Wishbone artist Jack Mildren, gave the Huskers a magnificent battle before becoming Nebraska’s 21st straight victim. It was also Nebraska’s 30th straight win without a defeat. 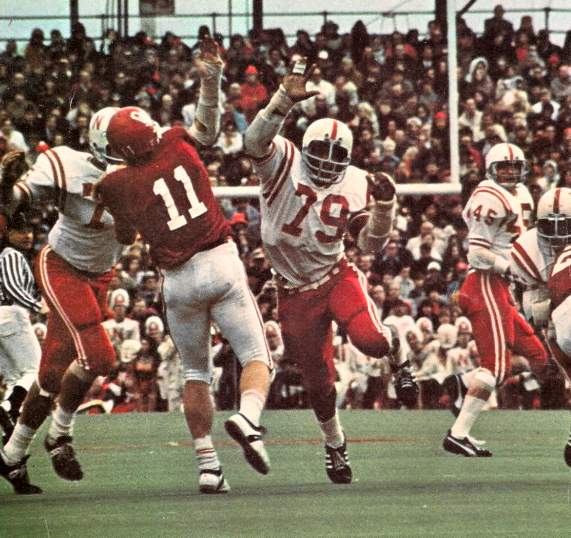 Johnny Rodgers provided the lightning to ignite the Cornhuskers to an early 7-0 lead, but it was the quarterbacking of Jerry Tagge and the running of Jeff Kinney which sparked the final drive after the Black Shirts — spearheaded by Rich Glover and Outland Trophy winner Larry Jacobson — had blunted but not stopped the Wishbone.

With 7:10 left in the game, Oklahoma took the lead, 31-28, and then the Cornhuskers went to work. The Huskers took 5:32 to march 74 yards in 12 plays for the winning TD. In the final 1:38 remaining for the Sooners, the Black Shirts stopped them cold and NU sacked up its third straight Big 8 title, the UPI National Title, and firmed its bid for a repeat consensus No. 1.

Rodgers electrified the huge audience with 11:28 left in the first quarter when he took a Sooner punt, twisted, turned and sprinted down the east sideline — spring by a Joe Blahak block on Jon Harrison — 72 yards to score. Rich Sanger kicked the first of five PATS to open the festivities.

The Black Shirts forced Oklahoma to settle for a field goal late in the first quarter, then forged a 14-3 lead when Jeff Kinney got the first of his four TDs from the one with 11.08 left in the half. But the Sooner Wishbone was far from finished as Jack Mildren scored to make it 14-10 with 5:10 left in the half and on the final seconds the Sooners struck again, via a 24-yard Mildren-to-Jon Harrison pass for a 17-14 halftime lead.

Nebraska again took an 11-point lead in the third quarter, thanks to two drives and Kinney plunges and it was 28-17 with 3:38 left in the quarter. Back came Oklahoma and Mildren ran another in to make it 28-24 with one quarter left.

Tagge again marched the Huskers goalward, but fumbled and Oklahoma caught fire. With Mildren running and passing, OU electrified the nation by taking the lead for the second time, this by a 31-28 margin with 7:10 left in the game.

Then came the test of the champions — and Nebraska responded, ramming to victory and settling the No. 1 debate, at least until January 1.

Highlights, of course, were plentiful, but most impressive were such notable accomplishments as Jeff Kinney running for 171 yards and four TDs … Jerry Tagge guiding the Huskers with excellence and authority … Johnny Rodgers’ dazzling running and receiving … Rich Glovers’ 22 tackles, tabbed the “greatest job by a defensive lineman ever seen” by many … Larry Jacobson’s awsome pass rushes … and the Black Shirts holding Greg Pruitt to only 53 yards rushing.