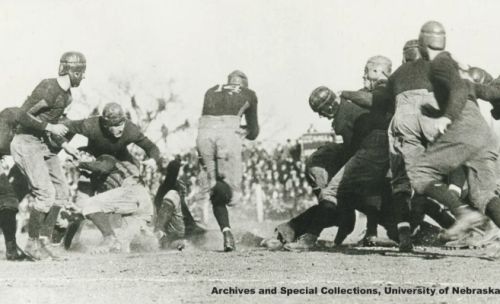 As the fourth quarter began, it was gut-check time at Nebraska Field. Nebraska had run roughshod over Notre Dame during the first 30 minutes of play, but that was a distant memory. The 1922 Cornhuskers were now hanging on for dear life. 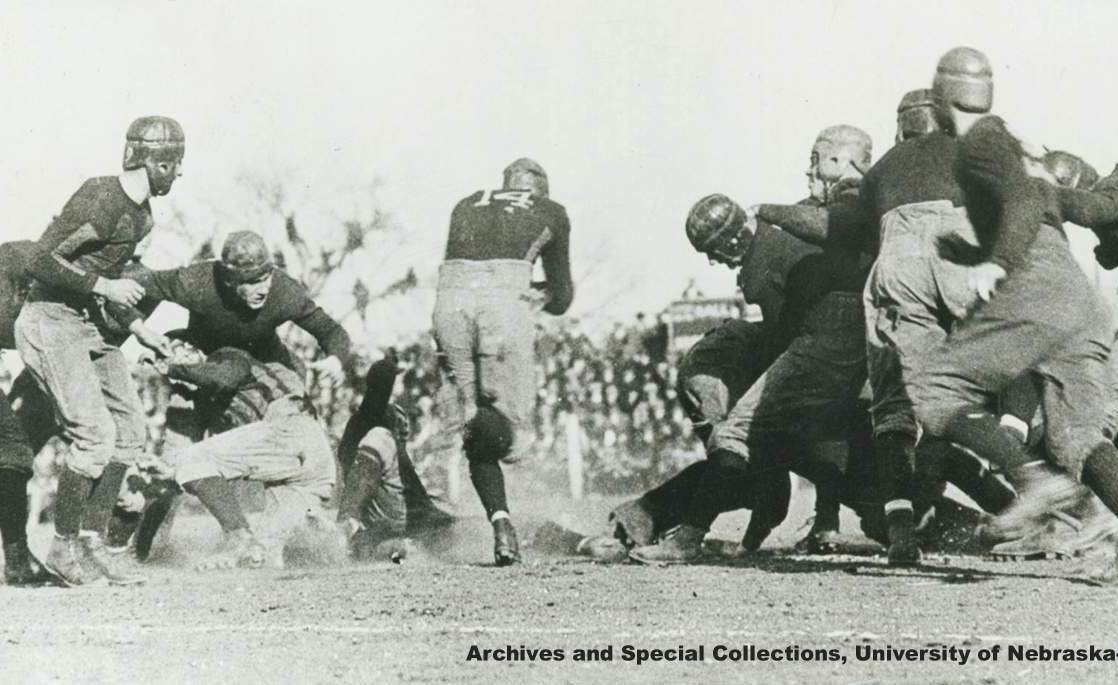 Verne Lewellen charges through a hole in the Notre Dame line. | More photos

As the fourth quarter began, it was gut-check time at Nebraska Field.

Nebraska had run roughshod over Notre Dame during the first 30 minutes of play, but that was a distant memory. The 1922 Cornhuskers were now hanging on for dear life. 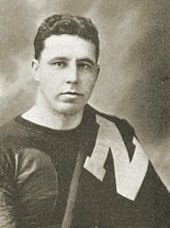 The Fighting Irish and their budding “Four Horsemen” had unleashed a dizzying passing game after intermission. Nebraska’s offense, so powerful in the first half, had managed a measly three yards the entire third quarter. The resurgent visitors had trimmed the Huskers’ lead to 14-6 and were knocking on the door again with a first down at the Nebraska 10.

Three times the Irish smashed into the Nebraska line. Each thrust moved the ball closer to paydirt, and now it was fourth-and-goal at the 3. The Huskers needed one more stop.

Harry Stuhldreher took the snap from center and dropped back to pass. From his left end position, Nebraska’s Andy Schoeppel stormed through, and the native Kansan known as “Shep” tossed the Notre Dame quarterback for a 10-yard loss.

The overflow Thanksgiving Day crowd at Nebraska Field rejoiced. That would be the Irish’s last, best chance, and the Huskers went on to salt away a 14-6 victory over a nationally prominent rival they hadn’t beaten in their last four tries.

The goal-line stand clearly energized the Cornhuskers. Inside your own 15 is no place to be in the final period of a tight game, and Nebraska used punishing run after punishing run to move the ball safely into Irish territory.

That was more like the Huskers of old. The first-half Huskers.

Nebraska set the tone with its first possession of the game. The Irish were outweighed by at least 15 pounds per man, a situation that coach Fred Dawson’s Huskers had every intention of exploiting. That they did, marching more than 60 yards in roughly 20 plays, with all but 12 yards coming on the ground. A fourth-down fumble by Dave Noble at the 1, however, kept Nebraska off the scoreboard. 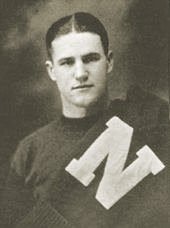 The teams exchanged punts, and Nebraska was on the move again from its 25 late in the first quarter. The Irish had trouble standing up to repeated smashes between the tackles by Noble, Harold “Chick” Hartley, Verne Lewellen and Bob Russell. On a third-down play early in the second quarter, Nebraska changed things up with an end around that sent Leo Scherer scampering 16 yards to the Notre Dame 9. Three plays later, Hartley plunged over from the 2 for the game’s first touchdown. Hartley’s drop-kick made it 7-0.

After a Notre Dame three-and-out, the teams had an exchange of fumbles and then an exchange of punts. Notre Dame’s kick was just a 25-yarder, giving the Huskers prime field position at the Irish 38.

Nebraska capitalized immediately. Hartley rolled left and shot the ball 12 yards downfield to Noble. The halfback caught the pass in stride, then dodged and stiff-armed his way to the end zone for six points. 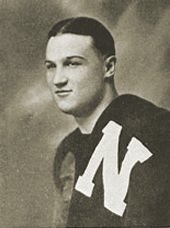 With Hartley’s PAT, the Huskers led 14-0. Nebraska already had more than 200 yards of offense, and Notre Dame had yet to earn a first down.

After another Irish three-and-out and short punt, the teams traded interceptions on consecutive plays, giving the Huskers another golden opportunity inside the Notre Dame 30. But a nine-yard run was followed by an incomplete pass into the end zone, which in those days was a touchback.

Notre Dame closed the first half by stringing together a few good runs and finally getting a first down. The Irish had been thoroughly outplayed, but they trailed by just 14. Might the Huskers’ two missed scoring opportunities come back to haunt them? It seemed unlikely, but few could have imagined the 180-degree turn the game was about to take.

THE IRISH ROAR BACK

It was almost as if the teams traded uniforms at halftime. In the third quarter, the Irish were suddenly the ones moving the ball, and the Huskers were on their heels. 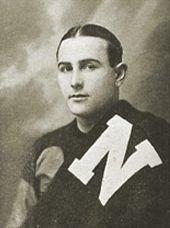 Notre Dame’s passing game was the difference. The Irish’s aerial tactics bewildered Nebraska and loosened things up for the running game.

It was on the Irish’s third possession of the quarter, from their own 24, that Notre Dame really revved things up. Elmer Layden connected with George Vergara for 24 yards on third-and-six to the Nebraska 38. Then on third-and-12, Layden passed to Don Miller, who raced down the sideline for a 40-yard touchdown. The PAT kick was wide, but the Huskers’ lead was down to 14-6.

After an exchange of three punts, the Irish were back in business at the 50. Again, the Huskers had no answers on defense. Notre Dame needed just six plays to sweep downfield to the Nebraska 10, where it was first-and-goal as the third quarter ended.

BACK IN CONTROL, MOSTLY

After the short break, the Huskers dug in, and Andy Schoeppel’s quarterback sack on fourth-and-goal turned the tables once more. 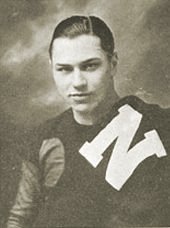 Nebraska drove the ball out of danger and then held Notre Dame in check the rest of the way — aside from one brief burst. Midway through the fourth quarter, the Irish reached the Nebraska 47 on an 18-yard pass, and then Jim Crowley broke loose on a run that appeared to have touchdown potential. He fumbled, however, and Nebraska’s Hartley recovered the ball at the NU 31.

Three plays later, Nebraska’s Herb Dewitz tore through the left side for a 40-yard gain to erase all doubt. Nebraska fans could start celebrating in earnest, and it mattered little when the Huskers failed to score on that possession and on a field goal try in the final minute. Notre Dame had gone down to defeat for just the second time in 41 games — a fitting finale for Nebraska Field’s 14-season tenure as home of the Cornhuskers.

Game details in this article were derived mainly from an examination of the play-by-play logs of the Nebraska State Journal, Omaha World-Herald and South Bend News-Times. Most of the game stories published immediately after the game contain one or more obvious conflicts with the logs. Go to the game page to see those articles and more. 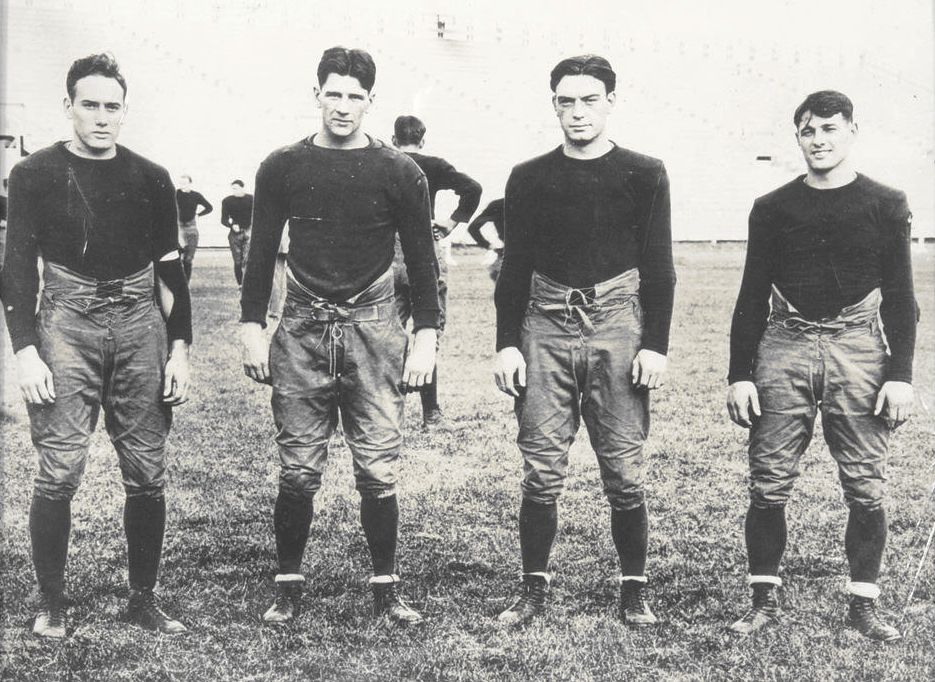 From left: Notre Dame’s Miller, Layden, Crowley and Stuhldreher in 1923. 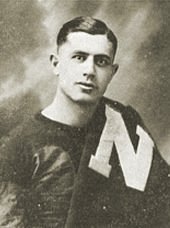 Notre Dame coach Knute Rockne said afterward, “We were beaten by the most powerful driving team I have seen in many years. No one could have stopped Noble today.” … Irish sophomores Stuhldreher, Miller, Layden and Crowley would go down in lore as the Four Horsemen. Their only other collegiate defeat would come against the 1923 Huskers. …

Nebraska’s No. 1 quarterback, Glen Preston, watched from the sideline with a leg fracture suffered in a scrimmage two weeks earlier. … Nebraska captain Harold “Chick” Hartley broke his nose early in game but played on; ditto for Notre Dame’s Glen Carberry with a broken finger, which he taped to an adjoining one. …

Nebraska kicked off to open both halves. … Each team punted on first down two times. … Notable attendees included coach Amos Alonzo Stagg of the University of Chicago and Gen. John J. Pershing. … Hundreds of fans without tickets watched from rooftops, tree limbs and the coal pile behind the east end zone. … At a pep rally the night before, team captain Hartley urged fans to refrain from destroying the fences and bleachers in the event of a victory. … The Irish were considered slight favorites by oddsmakers. …

Verne Lewellen was elected 1923 captain shortly after the game. … Andy Schoeppel was elected governor of Kansas 20 years later, and he also would serve in the U.S. Senate. … The Huskers’ only blemish during their 7-1 season was a 9-6 loss at Syracuse in early November. … The Huskers finished 60-11-4 at Nebraska Field, starting with a tie against Iowa on Oct. 23, 1909. 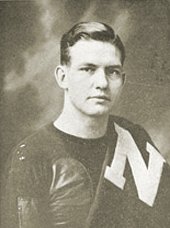 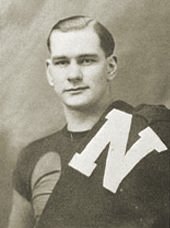 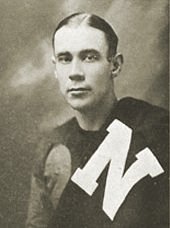 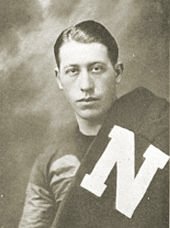 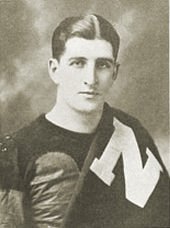 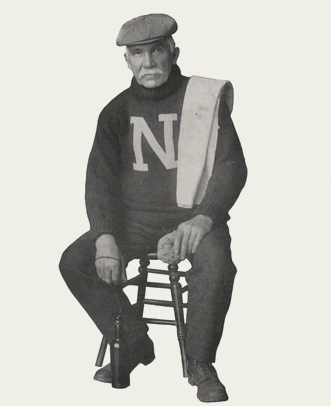 Before kickoff, fans paid tribute to Jack Best, Nebraska’s beloved athletic trainer and a fixture on campus since 1888. It was no secret that the big-hearted Englishman hadn’t much longer to live.

As the Omaha World-Herald described it:

He was carried to the sidelines in an automobile decorated in Nebraska colors. The sight of the Grand Old Man brought the immense crowd to its feet and the stands thundered out:

And it was then that the old trainer, with tears in his eyes, doffed his hat and waved a response to the throng.

Then the game. Jack said it was great. To see his boys triumph over their ancient enemy!

Best’s presence in the locker room before the game was said to be an inspiration to the players that afternoon.

Best died less than two months later at age 77. Classes at the university were canceled the afternoon of services, which were attended by more than 2,000 at the Armory. For more than 20 years ending in 1949, the Jack Best Trophy was awarded to the top fraternity in intramural athletics.