Husker Dan: Won and One to Go 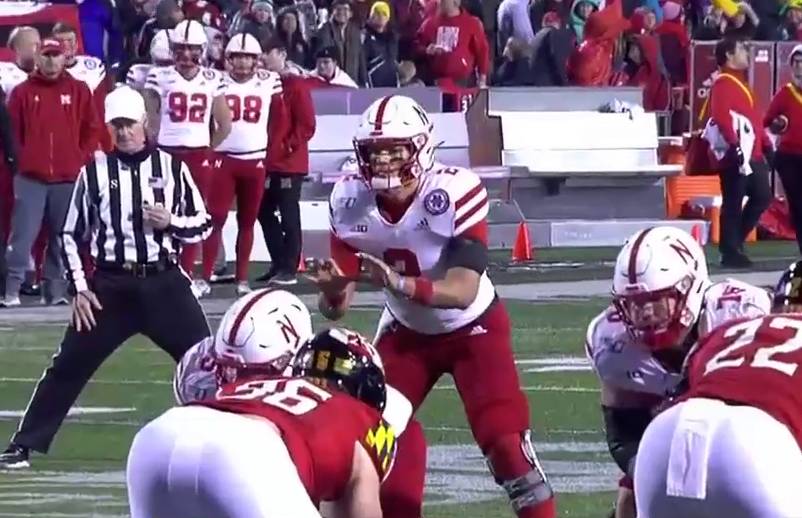 Adrian Martinez prepares to take a snap against Maryland.
By Husker Dan on 11/25/2019

This Friday, Nebraska will be playing a game in which the future of Husker football is at stake – at least for the near future.  Beat the Iowa Hawkeyes and the Huskers will become bowl eligible.  And with a win, Nebraska will be assured of its first non-losing season since 2016.

Nebraska put itself in position to become bowl eligible by beating Maryland Saturday, 54-7.

DOMINATE!
What was significant about Saturday’s win is that Nebraska, for the first time in a very long time, won all facets of the game:  offense, defense, special teams, time of possession and even the turnover battle.  For the record, NU now stands at even for the year in turnover margin.

The Maryland game was a chance to rest the regulars and give much-needed playing experience to a bunch of young players.

YEAH, BUT IT WAS JUST THE TURTLES!
And I know what you’re thinking, Husker fans.  Sure, Nebraska stopped a four-game losing string Saturday and were able not only to win the game, but do it convincingly.  But Maryland is a bad team – one of the worst in all of college football.  So why should Husker fans get excited about a win over such a bad team?

Second, NU thoroughly dominated the game – from start to finish.  The Huskers never let up all afternoon.  They made 6 sacks, forced 4 turnovers, dominated the time of possession (40 minutes to 20), committed only one penalty for 10 yards, made all their FG attempts, racked up 536 yards of total offense and limited the Terps to just 206 total yards.  And Nebraska scored in double digits in all four quarters.

So why should Husker fans apologize or hang their heads after such a performance?

I’m sure all those teams will be happy to tuck those wins over Maryland in their victory file.  The point is, Nebraska wasn’t supposed to beat Maryland by 47 points.  But the Huskers did win.  By a lot.  The win counts.  It feels good.  And the win was a step forward in the Husker football program under Year 2 of the Scott Frost Era.

Even with a win over Iowa, there probably won’t be any dancing in the streets of Lincoln.  But a win would put the Huskers in a bowl game.  I don’t care if it’s the Weed Eater Bowl.  At this stage, a 6-6 season will be a sign of progress.  And a bowl game appearance should be treasured by all Husker fans.

THE “SOD COUPLE” BOWL
Beating a good Iowa Hawkeye team is not going to be easy this Friday, but what should give Husker fans some hope in a Nebraska win is the way NU has played the past two weeks.  Against one of the best defenses in the country two weeks ago, NU racked up almost 500 yards of total offense in Lincoln against Wisconsin.  Yes, the Huskers lost the game and stumbled in the red zone that day, but if NU can play a really good game on offense and defense and limit mistakes, NU has a good chance of upsetting the Hawkeyes in the “Sod Couple” Bowl.

And a real bowl game?  Going bowling means the Huskers will get 15 more practices for the players – especially the 105 freshmen/sophomores currently on the team.

Make no mistake, Memorial Stadium will be rocking this Friday in Lincoln.  It will be THE place to be in the state.  I know one thing, Husker fans will do all they can to get the Scarlet & Cream over the finish line.

Husker Dan has been a regular contributor to Huskerpedia and HuskerMax since 2003.  We all know Dan is a couple of fries short of a Happy Meal.  And to prove that, he has a bumper sticker that says, “If You Don’t Like Doctors, Suture Self.”  You may contact Danny at HuskerDan@cox.net.