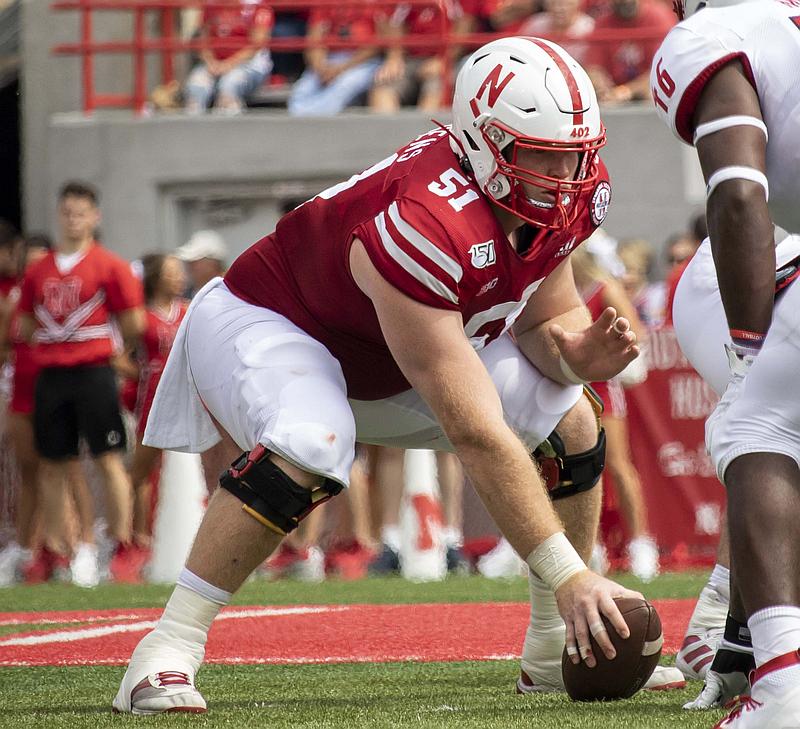 Kenny Larabee, KLIN
Cam Jurgens should be ready to support a steady Husker ground attack in 2021.
By Husker Dan on 9/3/2019

MUST LIST
There are a couple of preconditions for any aspiring football team: #1.) Take care of your home field and #2.) Win the games you’re supposed to win.

Mission accomplished on both counts for Nebraska after its 35-21 win over the underdog Jag-“wires” of South Alabama.

Wait, you say the win wasn’t pretty? That it was sloppy and had it not been for the Blackshirts and special teams, NU may have lost the game? Yup. Right on all counts.

What a difference a year makes.

Last year, any Husker win was considered great (even over Bethune-Cookman). But this year with expectations running so high in Y2 of the Scott Frost Era, Husker fans were sure their team would at least cover the 36½-point spread and turn the game over to backups in the fourth quarter.

And then reality reared its ugly head. Visions of a B1G championship game and a possible trip to NYC for the Heisman award ceremony will likely be set aside for the time being. (Maybe Saturday’s game was one of the reasons Scott Frost has a 7-year contract at Nebraska.)

So what happened to the Huskers Saturday? Why was this game close even in the fourth quarter? I’m not sure, but here are some things that may have impacted the outcome:

SOME IDEAS
1.) South Alabama had a year to prepare for Saturday’s game. They have good players and had a great game plan. Give them some credit.

2.) The Husker offensive line play was fairly inexperienced starting with Cam Jurgens, a RFr. center who had never played the position before, and a newcomer at LG in former walk-on Trent Hixson. The line didn’t play well, despite having all fall camp to come together. But there was at least one problem that may have kept the line from jelling: Cam Jurgens wasn’t able to practice the entire camp due to a nagging injury. Frost probably knew there could be some inexperience problems with these two players, but may have decided the upside for both of them was good enough for them to start. Frost may have thought it better to play them in a game against a lesser opponent (USA), rather than putting them in against a stronger team.

3.) And as a result of the inexperience in the line, Frost simplified the offense and kept CJ on a play count. (BTW, Cam is scheduled to start this Saturday at Boulder.)

4.) Timing is so crucial for any offense — especially one like Frost’s. And Cam’s habit of making high snaps no doubt disrupted the timing of Adrian and the rest of the offense.

5.) And it wasn’t just the O-line’s fault. Adrian Martinez (2AM) missed wide-open receivers and seemed at times to be confused on running plays. I doubt if we’ll see Adrian play that poorly ever again. And it didn’t help that RBs ran the wrong way and some critical blocks were missed, too.

6.) Too much hype?  The Huskers may have been a bit anxious because much has been (and still is) expected of this team this fall. The Huskers haven’t played with this much pressure on them in a long time. The USA game was going to be a chance to play a lot of players, but of course, that didn’t happen.

7.) There were several other first-time players in Saturday’s game, too. They will only get better as the season progresses.

8.) Combine all those elements and that may have been a perfect storm for a sub-par day for Nebraska Saturday.

NU WILL CU IN BOULDER
Next up, 3½-point favorite NU travels to Boulder to play their old Big 12 rival, the Colorado Buffaloes. If you’ll recall, 2AM was injured last year by an overly aggressive (?) CU player, causing Martinez to miss the next game which was a Husker loss to Troy State in Lincoln.

Check out CU’s two great players who will be trying to make the afternoon tough on the Blackshirts this Saturday: WR Laviska Shenault and senior QB Steven Montez. Shenault may be one of the finest wide receivers in the nation. He will be playing and starring on Sundays after he leaves Boulder.

It doesn’t take a genius to figure this week’s game: If the Huskers play as poorly as they did Saturday, Nebraska will stand at 1-1 for the season.

T-STORMS?
Thunderstorms are predicted Saturday at Boulder. Let’s just hope there isn’t a repeat of last year’s Akron game. On second thought, don’t even think about that.

LAST WEEK’S QUESTION
Thanks to all of you who weighed in on the question I proposed last week: Which of these four Husker home games would you most like to see the Huskers win: Ohio State, Northwestern, Wisconsin or Iowa?

You may write me at HuskerDan@cox.net with your responses.