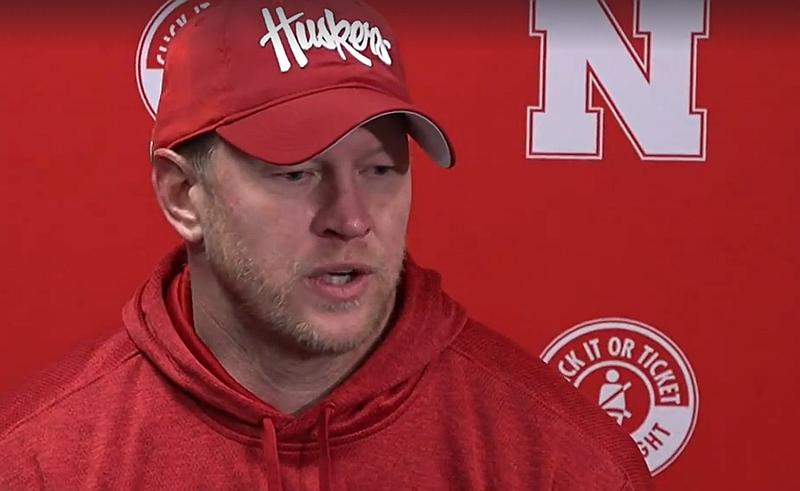 By Husker Dan on 9/18/2020
FROST PASSING
First of all, my condolences go to Scott Frost and his family for the recent passing of his father, Larry.  If you’re a long time Husker fan, you remember Larry as a halfback for Nebraska from 1967-1969.
As a starter his senior year, Larry was the NU Back of the Week for his play in the season opener in a home loss to Southern California.  In his career, Larry caught TD passes, ran for several more and was an excellent blocker for the Husker offense.  And the ’69 team helped pave the way for back to back Husker national championships in ’70 and ’71.
Rest in peace, number 28.
GLOOMY ZOOMY
As I watched the Big Ten’s Zoom video conference meeting announcing the start of B1G football, I couldn’t believe what I was seeing.
The day should have been one of rejoicing, celebrating and maybe one of thanksgiving.  But the conference meeting was anything but that.
Had I not known anything about the great news about Big Ten football, I would have thought I was watching a bunch of people talking about someone who had just passed away.
EXCITEMENT?
Conference Commissioner, Kevin Warren, never cracked a smile.  Not once.  When he said he was excited about “the student athletes” getting to play football next month, he didn’t look a bit excited or even happy.
Huh?
And that seemed to be the tenor of the rest of the panel that included Wisconsin A.D., Barry Alvarez, Northwestern President, Morton Shapiro, Ohio State Head Physician, Dr. James Borchers, Northwestern VP For Athletics and Recreation, Jim Phillips and Penn State VP For Intercollegiate Athletics, Sandy Barbour.
If that was an example of celebration and “excitement,” I would hate to see what sorrow looks like.
THE ANSWER PLEASE
When I was a kid, I learned (as a joke) how to say “I don’t know” in a way that made me seem much better educated than I was.  I used to say when I really didn’t want to answer a question: “I hesitate to expostulate upon the matter for fear of creating a false impression that would be very difficult to eradicate.”
And that’s the kind of claptrap we all heard on the Zoom call.
And when the Commissioner took a question from one reporter about his (Warren’s) poor communication skills during the past few months, the Commissioner bloviated instead.  His “answer” was to tell about what that a great job he’s been doing.
Huh?
(Warren’s response was reminiscent of what former Husker head football coach, Bill Callahan, said after his team lost 45-14 at home to a so-so Oklahoma State team in 2007.  When asked after the game how he would rate his performance, he said that he was doing an excellent job in all phases.  A few weeks later, Callahan was fired.)
Of course, Warren never answered the reporter’s question.  But the Commissioner did manage to pepper his response several times with how much he cared about “student-athletes,” adding how “excited” he was about the Big Ten being able to play football this fall.
Excited?  Husker fans know something about excitement.  Mr. Commissioner, please come to a Husker home game sometime when the stadium is packed (whenever that’s allowed to happen).  More about that later.
WHAT WE STILL DON’T KNOW
The conference call was cut short (don’t know why). Here are some questions I would have liked to have asked:
1.)  What happened to cause the conference to issue a revised fall football schedule on August 5th and only 6 days later, cancel the entire  season?
2.)  Was there any discussion at that time, of moving the schedules back a month rather than canceling the entire season?
3.)  Why did the conference ban football fans from attending all the conference football games for this season?
4.)  Why not leave that decision up to each conference member?
5.)  If the answer is because of the risk factor for COVID 19, won’t fans just have their own watch parties and will be at a greater risk than if they attended an open air home football game?
6.)  Why is tailgating on game days not allowed?  Aren’t they held outdoors?
7.)  Why wasn’t a new schedule released at the Zoom meeting?
8.)  Because the season stretches to December, will the new schedule include games held in dome stadiums like Minneapolis, Indianapolis and Detroit?  Will St. Louis’ stadium also be an option for December games?
9.)  And if dome stadiums are used, won’t that rule out the four home game schedules for this fall?  (Minnesota would be the only school that could have close to a home game in a dome stadium.)
10.)  Why is it that Notre Dame, a team that is located in the state of Indiana, has been allowed to play football as a member of the ACC, but two Big Ten teams located not far from South Bend, have not been able to play.  Did Notre Dame know something the Big Ten didn’t?
11.)  Aren’t the nine consecutive games setting up the conference football season for failure?  (There will be no bye weeks to reschedule games if (when?) there are COVID 19 outbreaks.)
LEADERS NEED TO LEAD
Leaders are supposed to be able to motivate, encourage, inspire their people, be transparent and create a vision for their organizations.  I doubt if Husker fans would give Warren a passing grade on any of these points.
I’m not sure who hired Keven Warren or what the process was, but it will be interesting to see if the return to Big Ten football will be enough for him to keep his job.
For many, Warren has failed as a leader.  His ability to communicate has been dismal.  As far as being transparent, it’s hard to be open when you won’t answer basic questions.  Maybe Warren has “worn” out his welcome.
You may contact the writer at [email protected]