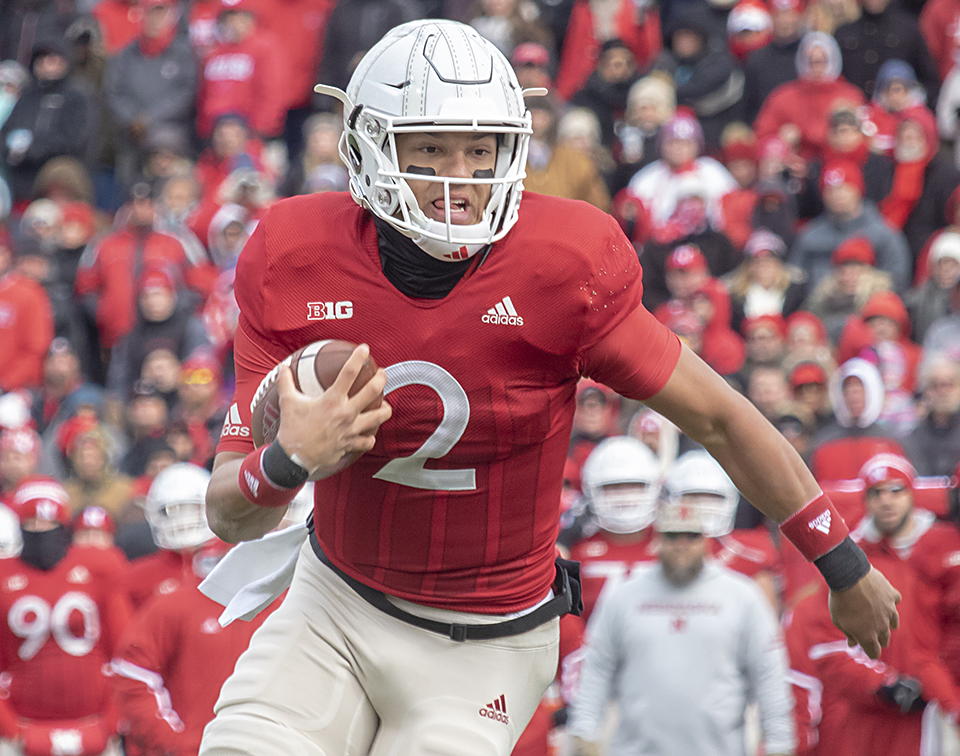 Kenny Larabee, KLIN
Adrian Martinez takes off on a 9-yard TD run in the first quarter
By Husker Dan on 8/26/2019

A reader (Craig from Connecticut) sent me an email recently, opining about Scott Frost.
I’m paraphrasing,  “Frost didn’t leave a 13-0 program at Central Florida to come to the cold climes of Nebraska just to go 7-5 or 8-4 and play in second rate bowl games each year.  He came here for two reasons:  to win conference and national championships.  Period.  End of story.”
And of course Craig is spot on.
So, what’s going to happen in Year Two of the Scott Frost Era at Nebraska?  Are the Huskers going to enjoy the same success in Y-2 that Frost & Company had at UCF, taking an 0-12 Knights team to 6-7 his first year and 13-0 in his second year?
That would be fantastic, but, in my opinion, not very realistic.
Having said that, it’s amazing how quickly Scott Frost and his staff have been able to change the culture of the Husker football program.  Frost & Company signed a very good 2018 recruiting class that was headed by QB Adrian Martinez.  And since then, Frost has added even more talent.  And to make sure every one of his players is on the same page, Frost had to let some players go.  And this year, Husker fans are about to see what effects the upgrades in talent and the changes in culture will have in the win/loss column.
THE 2019 SEASON AS I SEE IT
THE PLUSES:
1.)  The Huskers are a much better-chiseled team, thanks to the hard work by the players and the tutelage of S&C coach Zach Duval.  This year’s crop is bigger, stronger, faster, meaner and more talented.
2.)  The 2019 schedule is a huge change from last year’s.  In 2018, NU played Michigan, Ohio State, Wisconsin, Northwestern and Iowa all on the road.  This year, Michigan is absent and the rest of last year’s opponents have to come to Lincoln.  NU is going from the 12th most difficult schedule in 2018 to the 59th toughest schedule this fall.  And the Huskers’ 2019 opponents have a 53% winning percentage (based on their 2018 records).
3.)  The first two pluses should help NU finally get to a reasonably good bowl game this year.
4.)  Quarterback depth did a 180 this season.  What was an iffy position last year, especially with the departure of QB Tristan Gebbia, is now one of great strength.  As of today, Martinez is the starter and it’s Noah Vedral as his backup.  I know the Husker coaches would love to be able to redshirt #7, Luke McCaffrey, and use Vedral as Adrian’s backup all year, but don’t be surprised if McCaffrey earns the #2 spot at some point during the season.
5.)  The running back corps should be at least as good as last year’s group, even with the graduation of Devine Ozigbo (1,000-yard rusher).  Dedrick Mills gets the starting nod for this Saturday.  It’s a tough call right now as to the status of Mo Washington.  But I think we’ll see a lot of #28 this fall.
6.)  The D-line will be a source of strength for this year’s team.  I’ve heard some really great things about this group.
7.)  Special teams should be much better than last year.  JD Spielman is going to be the PR while either Wan’Dale Robinson or Mo Washington will be the kick returner.  And the Huskers’ punter and kicker return this year and both should be big assets for Nebraska.
8.)  The coaching staff has remained intact, save for last year’s D-line coach.
9.)  The second year in the system is going to be a huge plus for Nebraska this fall.
10.)  The depth and talent at WR will be as good as, if not better than, last year.
11.)  The secondary should be a very talented group – maybe one of the best on the team.
THE MINUSES:
1.)  The O-line is going to start a RFr at center (Cam Jurgens) and a former walk-on at LG (Trent Hixson).  BTW, Hixson was just awarded a scholarship.  How well these two players perform will say a lot about how the Huskers fare this fall.
2.)  The depth at linebacker may be a problem if injuries rear their ugly heads.
3.)  But unlike last year, the 2019 team has far fewer concerns going into the start of the season.
MY TAKE:
1.)  Even in tough games like Wisconsin, Nebraska should be in position to win them in the 4th quarter.  In fact, NU will likely be favored in all but one game this fall (Ohio State).  I’m not saying NU is going to win all of the other 11 games, but this year, for the B1G Conference, there may be a new sheriff in town (at least for the B1G West).
2.)  Will this be the year NU plays for the conference championship?  It may be.
Will NU win the game?  There’s no way of knowing at this point.  One of the problems is that talk is cheap.  Remember, NU hasn’t won a conference crown in 20 years.  And until NU does it again, we’ll all have to sit back and see what happens.
3.)  Husker fans are going to need a program to keep track of all the new players seeing significant playing time this fall.
4.)  How many games will the Huskers win this fall?  I wouldn’t be surprised with 8 or 9 wins.  But realistically, any win over 8 total this year, IMHO, should be a source of joy for Husker fans.
QUESTION:
Nebraska has 4 very challenging games at home this fall:  Ohio State, Wisconsin, Northwestern and Iowa.  Which of those games would you most like to see the Huskers win?  Let me know which team you picked and why.  Email me at HuskerDan@cox.net
You may contact the writer at HuskerDan@cox.net