Husker Dan: Is NU Getting To Look More Like UCF? 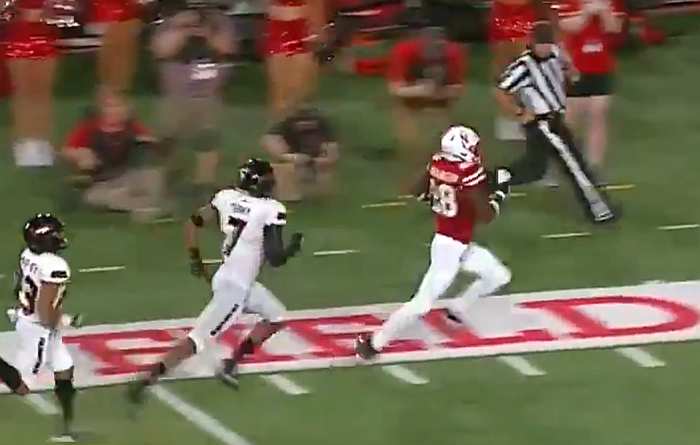 LET THE BLOODY GAME BEGIN!
Saturday in Lincoln, Nebraska, the stage was set.  It was a night game at Memorial Stadium (is there a prettier sight than that?).  Nebraska was coming into the game after a mediocre performance at home against South Alabama in Game 1 of the season.  But more importantly, Husker fans were embarrassed for the Husker loss the following week to Colorado at Folsom Field.  Etched in the minds of all Husker fans was the way the Huskers lost that game. After leading at the half, 17-0, the Huskers wilted in the second half and in OT, losing 34-31 to a Colorado team that Saturday lost at home to the mighty Falcons of Air Force. Air Force for cryin’ out loud! So why couldn’t Nebraska do what the lowly Falcons were able to do?

So Husker fans took over that night.

You knew HF wanted blood when the noise level for the “HUSKER…POWER chant before the game rose to decibels reserved usually for teams like Ohio State.

Yes Husker fans wanted blood.  And it didn’t matter whose blood it was.  They wanted the college football world to know that the Huskers are alive and well.

And to the delight of Husker coaches, players and fans, they all got their wish with a 44-8 drubbing of a pretty good NIU football team.

What HF were treated with Saturday night were glimpses of UCF football-the 13-0 Central Florida program that Scott Frost built in his second year in Orlando in 2017.  Saturday, the Blackshirts made life miserable for the Huskies’ offense.  Defense like that hasn’t been played at Nebraska in quite awhile.  And that should surprise no one-it’s the type of D Frost promised he’d bring to Nebraska.

QUICK STRIKE “O”
And the Husker O, when it was clicking Saturday night, showed flashes of real brilliance.

Frost’s vision for Nebraska is what he developed at UCF:  a swarming defense, a quick strike offense and solid special teams play.  (Injuries to Husker PK, Barret Pickering have clouded the picture in the kicking game for NU.)

THE DRIVE
What may have sealed the game for Nebraska was the 39-second drive just before halftime.  Instead of taking a knee and heading to the locker room with a 23-5 lead, Frost decided to be bold and go for the gold.  The result was a 4 play, 50 yard scoring drive that left only 5 ticks on the clock for the Huskies.  Great drive.  The Husker killer instinct may be in the making.

THE ONE AND ONLY
It was amazing that NU committed only one penalty and had only one turnover the entire game.  Also missing so far this year for the Huskers are the senseless and costly penalties that plagued the Huskers much of last year.

THE STUDS
On offense, what can you say about Mo Washington?  He’s a difference maker.  An amazing player and he’s only a sophomore.  And RB transfer Dedrick Mills is looking more like what Husker coaches saw in him when he was recruited.

And JD is a stud and so is Wan’Dale.

And the stars of the defense?   Many players have stepped up to excel as Blackshirts:  Lamar Jackson, Cam Taylor-Britt, Eli Sullivan, JoJo Domann, Darrion Daniels, the Davis brothers, Will Honas and Mo Berry to name a few.  These guys are studs.  Nebraska is going to be a tough team to beat later in the year.  Let’s hope there’s enough in the tank to play well down the stretch.

INJURIES
Just what the Huskers didn’t want to happen, happened Saturday night.  In addition to injuries to the Husker placekicker, LT Brenden Jaimes and CB Cam Taylor-Britt left the game with injuries.

For now, the Huskers need to focus on how to beat Illinois this Saturday night in Urbana-Champaign.  To the Husker team:  no more let-ups, no more meltdowns.  Go for the jugular vein every play and in every game.

Let’s hope we see more of Central Florida in Nebraska’s team this Saturday night at Illinois.

Husker Dan is a legend in his own mind.  He’s been a regular contributor to David Max’s web sites since the 2003 season.  You may contact him at [email protected].