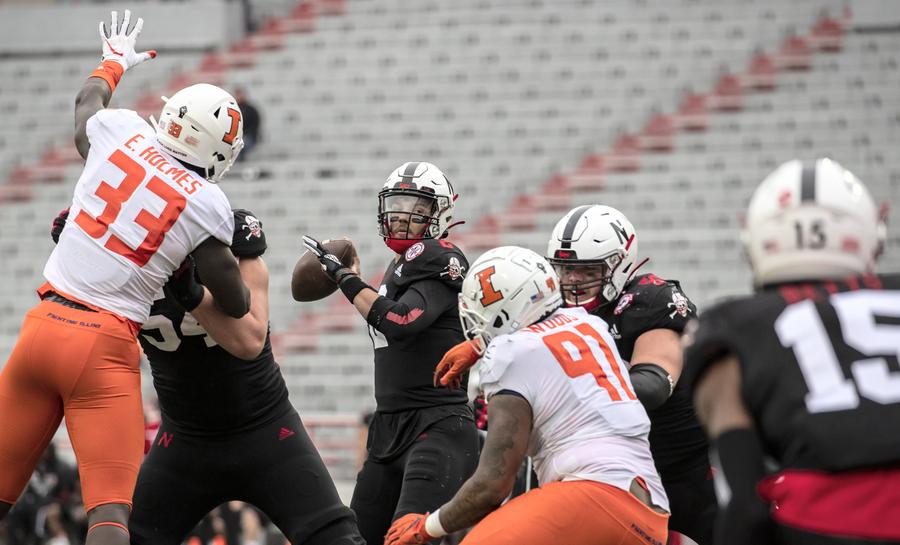 Huskers.com
Adrian Martinez looks for a receiver against Illinois.
By Husker Dan on 11/23/2020

Perhaps the one area that best demonstrates the futility of the Husker football program this fall is their turnover record after 4 games.  Going into Saturday’s home game with Illinois (a 23-41 Husker loss), Nebraska had a modest 0-0 record.  In other words up to that point, Nebraska had committed as many turnovers as it got from its opponents.

But after the Illinois game, Nebraska now stands at minus 5 for the season.  How can a team implode like that in just one week?  The blame lies, certainly with the players, but don’t the coaches need to bare the brunt of the blame?  Turnover problems have plagued Nebraska for years.

(BTW, Illinois converted those 5 Husker turnovers into 24 points.  If Nebraska hadn’t self-destructed that day, the Huskers may have escaped with a 23-17 win.)

BLOOD THIRSTY?
Any attempts to explain why the Huskers are struggling, end up sounding more like excuses.  And most fans don’t want excuses-not after 28 games under Scott Frost.  They just want somebody to blame. And they want the problems to get fixed.  They want blood.  Let’s get rid of the assistants, they say.  Bring in a new head coach (who knows who?) just anybody but Frost.

For one thing, Frost isn’t going anywhere.  At least not for the foreseeable future.  But what Husker fans have been seeing for 2 plus years is a football program that doesn’t appear to be improving.  In fact, it seems to be getting worse.  For starters, this program needs to climb out of the morass it’s been in and stop self-destructing.  That’s not too much to ask, is it?

QUESTION
I was thinking after Saturday’s game, about Frost’s Husker teams.  What do they do best?  I’m hard pressed to name anything.  I don’t want to beat a dead horse, but unless things improve, Nebraska is going to keep losing winnable games and getting taken to the woodshed by really good teams.

TWO THINGS
One thing I have a huge problem with.  On what planet is it a good idea to honor Husker defensive players with Blackshirts when Nebraska has won just one game all season?  Getting a Blackshirt used to mean something.  Getting one should always be a revered tradition-a high honor.

The tradition needs to continue, but not until Nebraska has a winning record.  As one of Steve “The Red-Clad Loon’s” characters used to say, “You know I am right!”

ALTERNATES?
And the same requirement needs to be applied to the wearing of alternate uniforms-the kind we saw the Huskers wearing Saturday.  Until the Huskers prove they can win games wearing their standard uniforms, they should not even consider alternates.

There, I feel better already.

NEXT UP
And unless there are drastic changes to the Nebraska football program this week, the Hawkeyes are going to gobble up the Huskers like a plate of leftover turkey.

Happy Thanksgiving everyone.  May you get to spend as much time safely in the company of your friends and family.

Feel free to give me a piece of your mind by emailing me at HuskerDan@cox.net.