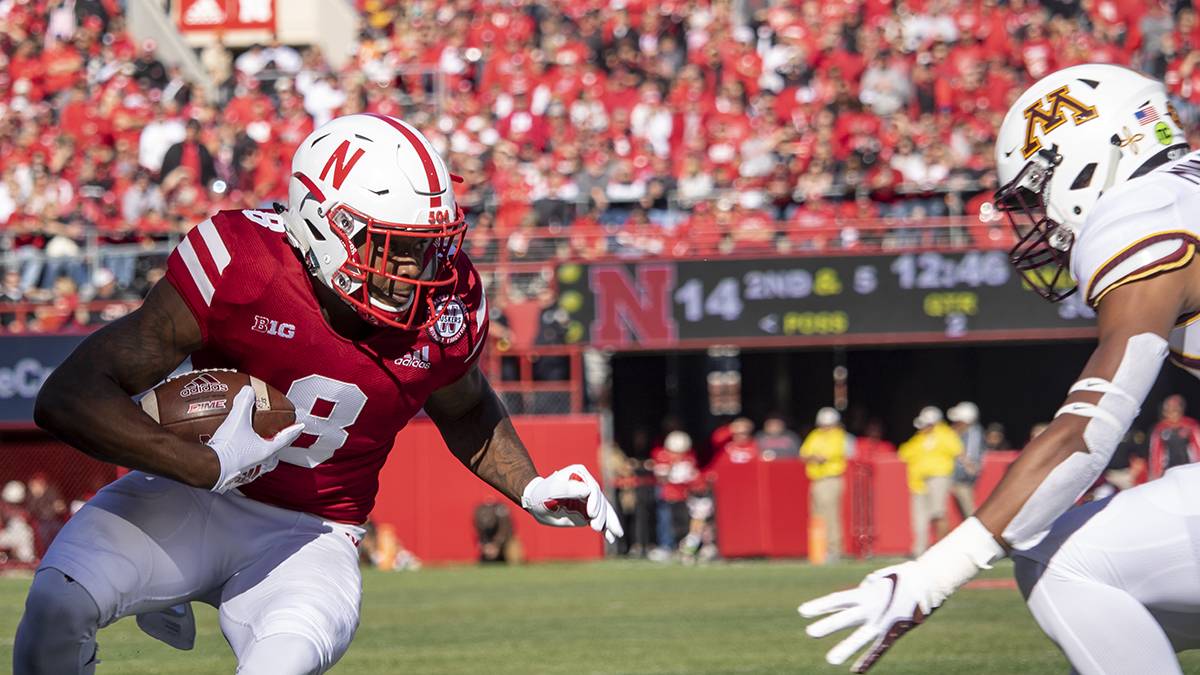 Kenny Larabee, KLIN
Stanley Morgan Jr. picks up some of his 163 receiving yards against Minnesota.
By Husker Dan on 12/12/2018

It’s hard to believe another year of college football is about to end.  Only the bowl season awaits.  But for the second straight season, Husker fans will have no bowl game to look forward to.  And unfortunately, the Huskers’ theme song will once again be “I’ll Be Home for Christmas.”

But even in a 4-8 season, there is still a lot to relish.  Last week, I offered my  2018 Husker Honor Roll.  And this week, I’d like to present what I consider to be the best plays, players, games etc. of the 2018 Husker football season.

Consideration was given to the strength of the opponent.  That’s why I haven’t included any highlights of the Huskers’ win over FCS Bethune-Cookman.

BEST OFFENSIVE GAME
Minnesota @Nebraska
This is an easy one.  It came November 20th in a 53-28 victory over the Minnesota Gophers.  Everyone saw the explosiveness of Frost’s offense and many of the weapons Husker fans will be seeing (hopefully) for years to come.  And in this game, NU scored the most points ever in a conference game since joining the B1G in 2011.

With the win, NU had 659 total yards of offense, including 383 yards rushing and 276 yards passing.  And the Huskers went 4 for 4 in Red Zone scoring chances and registered 28 first downs.  The win was the Huskers’ first of the season and Scott Frost’s first as the NU head coach.  Was Minnesota just a bad team?  Well, not really.   Later in the season, this same Minnesota team beat pre-season divisional favorite Wisconsin at Camp Randall.  And winning there (as all Husker fans painfully know) is no small task.

BEST DEFENSIVE GAME
Michigan State @Nebraska
Any time a team can hold an opponent to zero touchdowns and a total of 6 points in a win, that’s a pretty good defensive performance.  And that the win was over a team the caliber of Michigan State, is of special consideration.  Yes, the game was played in a snowstorm and Sparty was missing some key offensive players, but it was still a very gutty performance by the Blackshirts.  This may have been 2018’s “finest hour” for the Huskers.

BEST OVERALL GAME
@ #8 Ohio State
Although this was another loss for Nebraska, NU made the Buckeyes squirm for much of the game.  The Huskers actually led at the half, 21-16.  And remember, this game was played in the vaunted Horseshoe at Ohio State.  Nebraska forced 6 fumbles (2 were recovered by Nebraska), 1 INT, went 5 for 6 in the Red Zone, got 14 points off Buckeye turnovers, registered 27 first downs and had 450 yards of Total Offense.

Considering that Ohio State had embarrassed Nebraska the past two years by a combined score of  118-17, it was great to see how much the Husker football program had come in just a year.
https://www.youtube.com/watch?v=CsvfPKIAi5Q

Iowa, leading 28-13, was going for the kill.  They had a fourth down and short deep in Husker territory.  Had Iowa scored a TD on the play, the Hawkeyes would have had an almost insurmountable 35-13 lead.  And worst case, (I’m sure Ferentz thought) was that Iowa would have it first and goal at the Husker one yard line.

And had Ferentz chosen to kick the field goal, he still would have had a three score lead at 31-13.  But instead of kicking, he got aggressive (some would say greedy).  (Note:  Ferentz knew the kick wasn’t necessarily a sure thing.  Earlier in the game the Squawkeyes missed a field goal so it’s understandable that he would opt for a fake kick.)

The fake was on, but LB Luke Gifford had other thoughts.  He sniffed out the play, stopped the Iowa runner at the Husker two yard line, just short of the first down marker.

NU took over at its own 2 and subsequently went on a 98 yard TD drive that ended 14 plays later and pulled the Huskers within reach at 28-20.

And on that drive, Luke Gifford would make yet another great play.  Read on.

BEST SPECIAL TEAMS PLAY
@Iowa:  Luke Gifford running for a first down on a fake punt
I’ve never seen a Nebraska coach call such a crazy play so deep in the Huskers’ own territory.  Had the play not worked for Nebraska, Iowa would have scored a TD and the rout would have been on.  What a call, coach!

LB Luke Gifford (there’s that name again) had just stopped Iowa’s fake field goal attempt five plays earlier.  It was now fourth down and three at the Husker nine.  The Huskers lined up to punt, but instead of the snap going to the punter, it went directly to Luke Gifford who took off around the right side, found a lane open and gained 5 yards and an unbelievable first down.  Amazing!

BEST OFFENSIVE PLAY
@Iowa:  Adrian Martinez’s double extra point conversion
After the Huskers drove 80 yards to pull within 2 at 28-26 with 4:32 to go in the game, the Huskers had no choice:  Go for two.  And every one in the stadium knew that.

The double extra point play was designed to be a pass to the left side of the field.  Husker true freshman QB Martinez’s first read was Stanley Morgan, Jr., near the goal line but he was covered.  His next option was to TE Jack Stoll, who had fallen down.  So what did #2 do?  He reversed his field looking for someone-anyone to throw to.

Walk-on receiver, Kade Warner (son of NFL HOF, QB Kurt Warner) had also reversed his direction and worked his way along the back line of the end zone.  Martinez hit him with a perfect strike between three defenders.  And somehow, Warner managed to catch the ball and still keep both feet in bounds for the two point conversion.

BEST RUNNING PLAY
Illinois @NU by Devine Ozigbo
https://www.youtube.com/watch?v=41dixfUVd5E
There were so many “devine” runs this season by Ozigbo, that it was hard to select just one.  For my money, it was his run at home against Illinois.  He got the handoff from Martinez at the Husker 36 yard line.  DO broke through the middle, raced down the field and broke a tackle about mid field before racing to a 64 yard touchdown.  I wish Nebraska had him back for at least another season.  Don’t be surprised if he has a good career in the NFL.  Best of luck, Devine!

BEST OFFENSIVE SCORING DRIVE
@Iowa:  Huskers’ 98 yard scoring drive
The Drive began toward the end of the 3rd quarter right after the Hawkeyes’ failed fake field goal attempt. The Huskers had to convert 3 fourth down plays to get the touchdown that brought Nebraska to within 8 points at 28-20.  What a drive!

MOST IMPROVED PLAYER
RB Devine Ozigbo
Ozigbo was sometimes a milk carton player during his four years at Nebraska.  He would see some game action, then he’d disappear.  And even this year, his first with Frost & Company, he was MIA for parts of the season.  But his performances became electrifying and he seemed to get quicker and faster as the season went on.  DO became the first 1,000 yard rusher since Ameer Abdullah in 2014.  No one would have blamed Ozigbo for transferring, but he stuck with Nebraska and Scott Frost.  Devine should be a poster child for how not to quit.  He worked hard, got his chance and turned out to be one of the exceptional RBs in Husker history.  The NFL team that drafts him is going to get a great kid and a solid player.  Best of luck, #22!!

BEST PLAYER WHO DIDN’T LEAVE EARLY
WR Stanley Morgan, Jr.
This kid will also be playing on Sundays.  SMJ could have easily opted to forego his senior season to enter the NFL draft last spring, but #8 stayed put.  And in doing so, all he did was break the single season record for reception yardage (1,004) in Nebraska history.  What a headache he and JD Spielman were for opposing defensive coordinators!  He’s another player all Husker fans wish were coming back next year!  Best of luck, #8.

And there you have it.  Agree?  Disagree?  You may contact the writer at HuskerDan@cox.net.