Husker Dan: A B1G, Big Win for the Huskers! 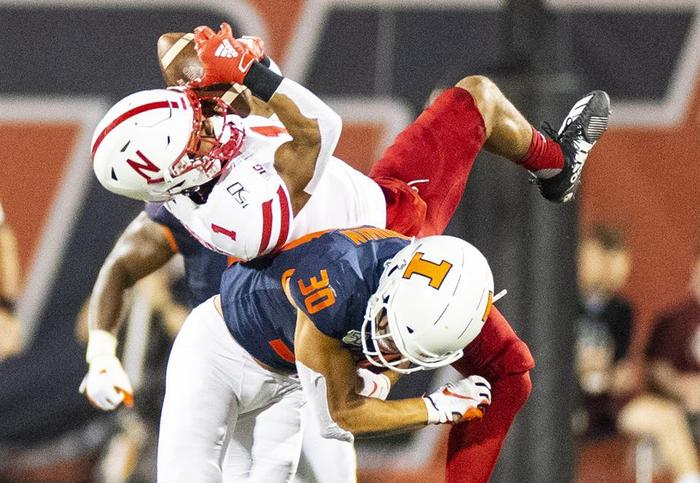 Courtesy of Huskers.com
Wan'Dale Robinson takes a big hit but makes the catch against Illinois
By Husker Dan on 9/24/2019

I had a chance to visit Sunday morning with former Husker assistant and current Director of Player Development, Ron Brown, about what he thought was the feeling of the team after Saturday’s 42-38 nail-biter win over the Fighting Illini.

“Whew!” was his response.

That pretty much sums up the feelings of most Husker fans, too.  What is important to remember is that this was a win for Nebraska.  To be sure, Saturday’s win was not only a B1G win (conference) but a Big win, too for Nebraska.  What do I mean?
THE 900 CLUB
Reaching the 900 win total in Husker history?   Joining a select group of teams like Michigan, Ohio State, Texas, Yale and Alabama?  Yes, but what I’m thinking more about is this season.
BIG WIN
Saturday’s victory was a conference win (and those may be hard to come by this fall), but the win was also a big win for this young Nebraska football team.
Lose the game and the Huskers go into this Saturday’s game with OSU at 2-2 with the likelihood of coming out of that game with a losing record at 2-3.  But with Saturday’s win, even if the Huskers lose to the Buckeyes, NU will still have a winning record at 3-2.  Maybe that doesn’t sound like much, but if Nebraska is going to make it to a bowl game, every win is critical.
And with the injuries the Huskers have sustained this fall, NU needs to play as close to error-free football if it expects to vie for any postseason play.  (And based on last Saturday’s four lost fumbles by Nebraska, the odds don’t look too good for that to happen.)
The Huskers’ Total Offense was outstanding Saturday (even despite the 4 lost fumbles):  690 yards (it would have been at least 700 had Nebraska not lost yardage in the victory formation).
And guess what, the Huskers needed just about every yard of that to win the dang game.  This was a game reminiscent of last year’s 0-6 start that saw the Huskers fumble and stumble their way in finding creative ways to lose games.  (NU lost 5 games by 5 points or less in 2018.)
Last year’s Husker team would probably have found a way to lose to Illinois.  But Saturday, the Huskers found a way to win.  It wasn’t pretty, but a win is a win is a win.  And maybe, just maybe, Nebraska is starting to find ways to win close games.
GUTS AND CUTS
What can any one say about the guts and determination of Adrian Martinez, JD Spielman, Mo Washington and Wan’Dale Robinson?  Those guys are studs-and tougher than Chinese arithmetic.  And what about the insane catch by TE Jack Stoll?  Are you kidding me?  And how would you like to tackle Washington?  He has the ability to turn on a dime and has the speed to take it to the house on almost every play. (He might be a faster version of Johnny Rodgers.)  It looks like Washington may have suffered a concussion in the first half of Saturday’s win, but the good news is, he was back at practice this week.  If he’s cleared to play this Saturday, he will give the Huskers a lot better chance of hanging with the Buckeyes.
LOVIE’S PRESSER
Illinois head coach, Lovie Smith, said after the game that “Nebraska is a great offensive football team.”  He said that three times, but nothing about the Blackshirts? Huh?
Did I miss something?  Nebraska held IU to 299 Total Yards of Offense for the entire game, including a whopping total of 78 yards passing.  Any time a B1G team is held to under 300 yards of TO, it’s a pretty good accomplishment.
THE BACKSHIRTS?
It’s so great to be writing about the Blackshirts again!  They have come back after a long absence.  (JoJo Domann got his Blackshirt this week.)
I know, the Husker defense still misses tackles, but the group seems to be getting better each week.  The passion and intensity have returned. DC Chinander has done a great job coaching the Blackshirts.  I’m sure he would like his players to get more turnovers and to give up fewer big plays, but I think that will happen over time.
ESPN GAMEDAY
I’m not sure why GameDay is coming to Lincoln this Saturday, but it probably has something to do with a lack of better match-ups.
“GIT ‘R DONE!”
I just hope their being in Lincoln is not a distraction to this young football team.  As to who might show up on the panel, my money’s on Larry The Cable Guy.  He’s funny, genuine and is very knowledgeable about Husker football.  “Git ‘R Done” Danny!
CAPTAIN OBVIOUS
I’m not making predictions other than if the Huskers are to have any chance of upsetting the Buckeyes, they are going to have to eliminate or significantly reduce their mistakes.  Turnovers, poor placekicking, silly penalties and inconsistent play have hurt Nebraska this season.
If the Huskers don’t give the game away, I think they can make it a game into the fourth quarter.
Husker Dan writes from a fan’s perspective.  I don’t want to say he’s not the brightest bulb in the drawer (how’s that for a mixed metaphor?), but he does have a bumper sticker that says “Honk If You Like Noise.”  You may contact the writer at [email protected].