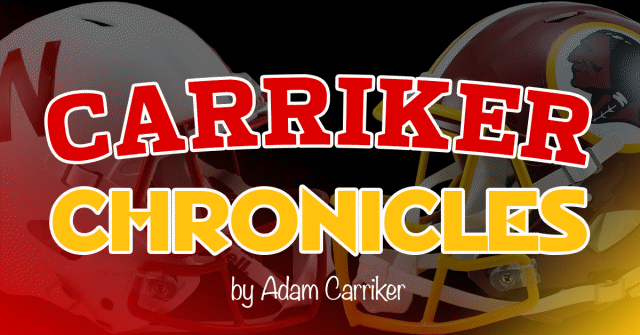 The National Signing Day edition of the Carriker Chronicles!

1- I'd like to welcome all the new Huskers to the greatest football program in America! It's just a fact.

2- Patrick O'Brien has gotten most of the attention from this recruiting class. He's a highly rated quarterback who has enrolled in school early and is going to challenge Tommy Armstrong for the starting quarterback job. But don't overlook Tulane transfer Tanner Lee down the road. He started 19 games in his two seasons at Tulane. Regardless of who starts at quarterback this upcoming season, Lee and O'Brien will go be two good quarterback options in 2017.

3- Depending on which recruiting site you believe, Nebraska had the 26th ranked recruiting class this year. In my opinion that is a decent year and coach Riley has shown that he's a good recruiter. It's hard to argue that he's a great recruiter or a poor recruiter, simply because the Huskers don't typically bring in top 10 classes on a continual basis. At the same time, from what I understand the best recruiting class Mike Riley had at Oregon St. ranked 38th.

4- Nebraska did land the highest ranked class in the Big Ten West and the fifth ranked class overall in the Big Ten behind Ohio St., Michigan, Michigan St. and right behind Penn St. They also had 5 young men ranked in the top 300 commit. Like I said, a decent class. The rankings don't really impact me either way though, because the Huskers have won plenty of championships with classes ranked about the exact same as this one.

5- I was surprised not to see a single junior college commit. I don't know that it's a good or bad thing, just something I thought was noteworthy. I do think typically a couple junior college recruits is a good thing.

6- With Maliek Collins and Vincent Valentine heading to the NFL early, Nebraska needed to sign some pass rushers and bolster the defensive line. They signed defensive ends Quayshon Alexander and Ben Stille. These two guys are a little bit under the radar, but they're two guys I think can help the Blackshirt pass rush down the road, as long they're willing to do the work.

7- The Huskers brought in plenty of offensive lineman, headlined by John Raridon. The offensive line struggled a little bit last year and if we're going to consistently be able to run the football like a typical Nebraska football team, then we need to re-establish the pipeline. Give the offensive line from last year credit though, they sure pushed around those California kids from UCLA in the bowl game pretty well.

8- The position that stood out the most to me was defensive backs. We brought in four defensive backs. This position is headlined by Marquel Dismuke and the late edition of Lamar Jackson. This should give Husker fans a good reason to be excited. Combined with the fact that there were 16 freshman and sophomores that played extensively in the bowl game (most of them as linebackers and secondary personnel), the back end of the Blackshirt defense has some good potential.

9- I'd like to point out one thing. I never read too much into the amount of stars behind a high school kids name. I understand you need talent to win, don't get me wrong. But I mentioned before, our Huskers have won a lot of football games against teams that were supposed to beat us simply because they won the National Signing Day championship. I'd like to welcome these young men into the Nebraska brotherhood and the Husker family. I'll do anything I can to help any one of them.

10- But now the real work begins. What makes Nebraska football so special, what makes the Husker football program the best in America is the class, respect and work ethic everyone involved with the football program puts in. From the moment these guys step foot on campus, I want to see nothing but relentless hard work and dedication from them. And I'd like to see them do it together as a unit and family. That's what separates our football program from everyone else. We have young men with talent, who work, grow and develop into great football players, until we can't be beat ... won't be beat!

To stay up to date on all things Adam Carriker related, check out my Facebook page. Until next time Husker Nation ... Go Big Red Baby!