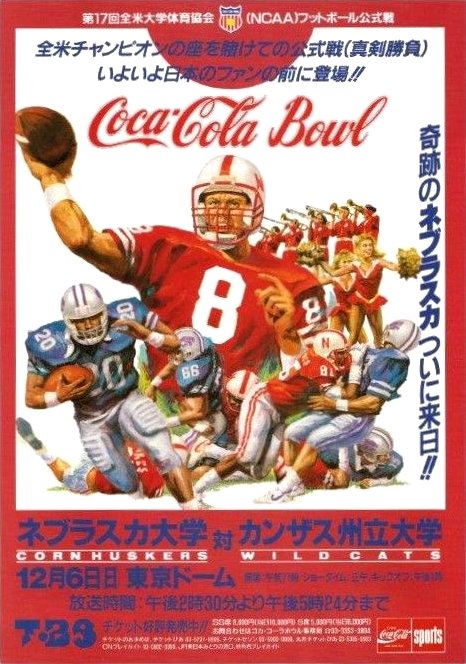 In a first-ever international appearance for both teams, the Nebraska Cornhuskers and Kansas State Wildcats met in Tokyo, Japan. Nebraska wrapped up the Big Eight Championship with a 38-24 win and earned its second consecutive trip to the Orange Bowl, but also gained from the experience in other ways.

It was a unique opportunity for college students to travel abroad and be exposed to a completely different culture and way of life. Even the game itself was a unique experience.

The following is a brief recap of the Huskers’ six-day trip to Japan.

Tuesday, Dec. 1: The team left Lincoln in the morning, met up with the Kansas State team in Kansas City, then departed K.C. at 3 p.m. central time via Japan Air for Tokyo, via Vancouver. After a 13-hour trip from Kansas City, the teams arrived in Tokyo at 4 a.m., Nebraska lime, but it was 7 p.m. on WEDNESDAY, in Tokyo.

Thursday, Dec. 3: The team practiced at Jinju Baseball Stadium, Coach Osborne and selected players attended a press conference, then in the evening, the team attended a welcome party at Senshu University, a sister school of UNL. There, the players met Senshu's football team, known as "The Green Machine."

Friday, Dec. 4: After a second day of practice, both K-State and Nebraska attended a welcome party at Kansas State's hotel. The guests enjoyed dance routines of visiting yell squads and music of the Texas Southern band. Then, the players danced and relaxed as a local rock band performed.

Saturday, Dec. 5: Nebraska went through its usual walk-through practice and took pictures in the "Big Egg," the Tokyo Dome. After lunch, members of the team enjoyed a short bus tour to the Imperial Palace where the Emperor lives and to the Tokyo tower, a lookout tower patterned alter the Eiffel Tower. The team turned in early after watching their usual pre-game movie, this time on TV via VCR machines.

Sunday, Dec. 6: Game Day. Nebraska defeated Kansas State 38-24 in front of a crowd of approximately 50,000. Kickoff was 1 p.m. in Japan, but 10 p.m. in the states. Approximately 250 Nebraska fans attended. The crowd picked a team, then cheered for good plays, good yell squad routines and great songs of the band, which played throughout the game. After the game, many members of the staff and players enjoyed getting out of the hotel and visiting local restaurants for the first time. A McDonald's quarterpounder with cheese cost approximately 800 yen, or approximately $6.40.

Monday, Dec. 7: The team had their bags packed the night before and on Monday morning set out to see the sights. The Huskers visited a temple, several shrines in the Ginzu area, then shopped at the local outdoor stores. Both teams arrived at the airport at 2 p.m., in order to get the group of 300 through customs before the 4 p.m. flight. Again after a short layover in Vancouver and three in-flight movies and meals. Kansas State and Nebraska personnel arrived in Kansas City at 2 p.m., Central, on Monday...two hours earlier than their watches read if still set on Tokyo time. Nebraska bused back to Lincoln, arriving at approximately 6 p.m.

Husker outside linebacker Trev Alberts said, "It was an extremely long flight and certainly was different preparing for a game in a foreign country than in Lincoln, but it was an enjoyable experience. It was a once in a lifetime opportunity."