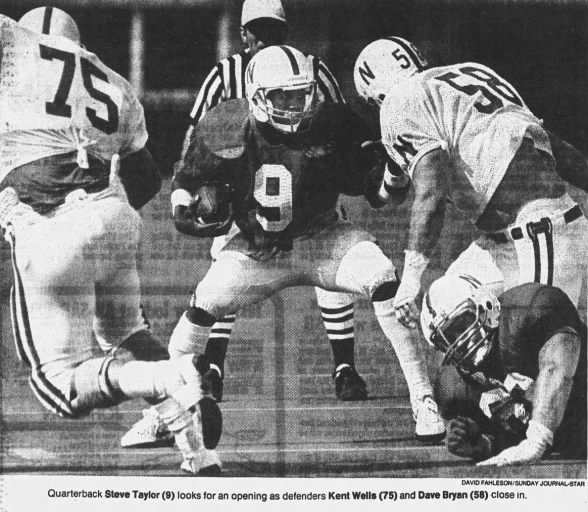 Quarterback Steve Taylor ran for three touchdowns and passed for another as the Red team thumped the White team 70-14 in the University of Nebraska spring football game.

The 70 points scored by the Red team, which included the Cornhuskers' first-string offense and defense, was the most ever scored in a Nebraska spring game.

Taylor opened the scoring in the first minute of the game, running 6 yards for a touchdown after Brian Siebler intercepted a pass.

Dana Brinson returned a punt 65 yards for a touchdown and Cleo Miller ran 32 yards with an interception for another TD. Taylor then hit a wide-open Von Sheppard for a 61-yard touchdown pass to end of the first quarter with the Red team ahead 28-0.

The Whites struck first in the second quarter as reserve quarterback Jerry Mlinar picked up a bad snap on a field goal attempt and passed 29 yards to Mark Diaz for a touchdown.

The Red team responded with a short touchdown run by Micah Heibel and a 6-yard touchdown pass from Clete Blakeman to Todd Milliken, boosting the Reds' lead to 42-7 with 38 seconds left in the half. Incredibly, two more touchdowns would be scored before intermission.

Lorenzo Hicks returned the kickoff 85 yards for the White squad, and the White then recovered an onside kick. But Brian Davis interceptod a pass for the Red team and streaked 67 yards down the sideline to make the score 49-14 at the half.

Taylor scored twice on 1-yard runs in the third quarter, and Brinson scored from 81 yards out after catching a swing pass from McCathorn Clayton.

Taylor went into spring practice sharing the top spot with Clayton, who started several games last fall for the Cornhuskers. By the end of the spring, however, Taylor emerged as the No. 1 quarterback.

Taylor said he was pleased with his progress this spring. "The first day of spring ball I was so nervous I couldn't throw a spiral, but I settled down and got more comfortable," he said. "I feel a lot more comfortable with our offense and with the players. We have a lot more confidence in each other. In order to win a national championship or a Big Eight championship, you have to feel that way."