Trailing 12-10 as the fourth quarter opened—after leading early, 10-0— Coach Bob Devaney's Huskers passed and ran over and through the defensive titans of the nation for the winning touchdown.

It came with 6:10 gone in the final quarter when Jerry Tagge, the engineering genius of the night, clinched the Most Valuable Back Trophy by plunging over from the one and then extended his arms high over the pile — just to make sure.

With victory came the certainty that Nebraska would be voted No. 1 by the Associated Press, the Football Writers Grantland Rice Trophy and almost all of the other pollsters. No. 1 Texas and No. 2 Ohio State both lost, leaving the door open to Nebraska and the Huskers charged to glory with a great win over a very fine LSU football team.

Tagge hit 12 of 25 passes for 153 yards, ran tough, and directed the Huskers in expert fashion. Outstanding lineman honors went to Defensive End Willie Harper, the ferocious soph who gave LSU's attack fits all night. It was Willie's ball-theft — along with Bob Terrio's interception at the bell — that put the cap on the victory after Nebraska moved ahead, 17-12, in the last quarter.

Nebraska led the statistics as well as the score, netting 132 yards rushing (most against LSU in two years) to the Tigers' 51. NU had a 293-278 bulge, overall, in posting the Huskers' 19th straight game without a loss.

Devaney's Cornhuskers, fired up by the news that Texas and Ohio State had lost, struck LSU quickly for a 10-0 first-quarter lead. Paul Rogers kicked a 26 yard field goal and Joe Orduna ripped off a three-yard TD blast after Willie Harper had recovered an LSU fumble at the 15.

But Coach Charlie McClendon's Tigers fought back for two field goals in the second and third quarter as Mark Lumpkin hit from 36 and 25 yards out. A 31-yard TD pass from Buddy Lee to Al Coffee on the last play of the third quarter put LSU on top, 12-10, and the monkey on Nebraska's back.

Like the national champions they were, the Cornhuskers met the challenge and pulled out the victory and the unbeaten season (11-0-1).

THIS & THAT: The Blackshirts' pass rush was a huge factor as Nebraska registered 14 tackles for loss totaling 115 yards. ... Nebraska's two rushing touchdowns matched the total surrendered by LSU during the entire regular season. ... The Huskers' 132 yards of rushing was 2½ times LSU's season average of 52.2 rushing yards surrendered. ... "Nobody ran against us the way Nebraska did," said LSU defensive tackle John Sage. "They were better offensively than Notre Dame." ... During the winning drive, LSU recovered a fumble by Joe Orduna at midfield, but the Huskers kept the ball thanks to a quick whistle. ... Said LSU coach Charlie McClendon: "In my mind, there's no doubt who's No. 1 — it's Nebraska. We played them both, lost to them both. Nebraska is No. 1." ... LSU quarterback Buddy Lee said Ed Periard in particular was a menace: "That little short guy, No. 56, was lining up over center and popping through there about as fast as I was getting the ball." Periard racked up three sacks for 30 yards in losses. ... As for the national championship debate, Lee said, "I'm not sure Nebraska is better than Notre Dame, but under the circumstances, Nebraska deserves No. 1."

THE FINAL MINUTES: After Tagge's touchdown, Nebraska had a chance to extend its lead when Willie Harper forced a four-yard LSU punt and the Huskers took over at the Tigers' 43. But Joe Orduna's fumble at the LSU 13 gave the Tigers new life with 4:09 left.

After gaining a first down, LSU suffered back-to-back sacks and faced third-and-29 from its own 7. Amazingly, quarterback Bert Jones got the Tigers out of that jam with a 31-yard completion down the right sideline to Andy Hamilton.

One more first down moved the Tigers to their own 49, and that's where Harper intervened once again. Jones dropped back to pass, and Harper wrested the ball away as the quarterback tried to avoid heavy pressure from Harper, Ed Periard and Larry Jacobson.

Under a minute and a half remained, but Nebraska again failed to salt the game away. On a third-and-six carry by Tagge, LSU defensive end Arthur Davis punched the ball loose, and the Tigers were in business, 60 yards from paydirt with 52 seconds left.

On the ensuing play, Jones fired a deep pass over the middle. This time, the Huskers had an answer to the Jones-to-Hamilton connection. Linebacker Bob Terrio beat the Tigers' split end to the ball and picked it off at the Nebraska 38.

The Huskers and their fans could finally exhale. The Nebraska bench celebrated as two kneel-downs by Tagge consumed the remaining 45 seconds. 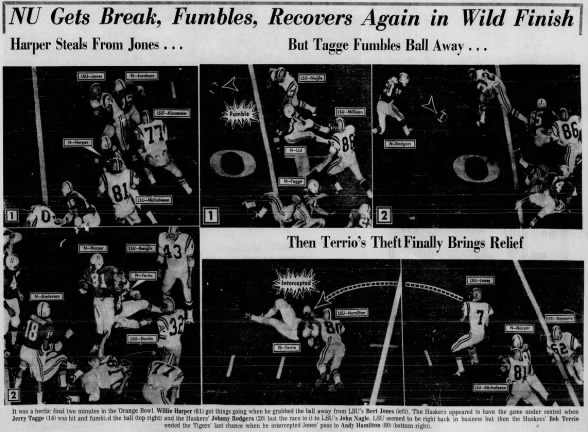