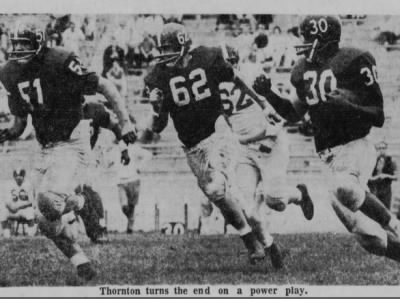 Stunned by a spectacular scoring scamper late in the first half by newly minted alum Pat Fischer, the Varsity went into the locker room trailing the Alumni 14-13 in Nebraska’s annual spring game. But the Varsity had a Thunder bolt of its own and pulled away in the second half for a 35-20 victory over the graybeards.

The Varsity jumped to a 13-0 lead on marches of 92 and 87 yards. Bill “Thunder” Thornton tore off runs of 28, 19 and 23 yards during the two drives and would finish with 115 yards on just 11 carries. On the Varsity’s second score, end Don Purcell won a battle with Rex Fischer for a Dennis Claridge aerial at the 10 yard line and ran into the end zone to finish the 38-yard play.

Less than two minutes later came the Fischer play that electrified the crowd. From the Varsity 36, Vacanti passed to Clay White, who lateraled to the speeding halfback. Fischer dodged tacklers, reversed his field at least twice and finally broke into the clear to give the Alums their halftime lead.

The Varsity took charge in the third quarter. First came a 60-yard drive directed by Claridge and capped by a short TD run by Don Comstock. Late in the period, tackle Bob Brown recovered an Alumni fumble to set up the Varsity just 23 yards from paydirt. Pat Clare ran it in from four yards out, and the Varsity had a 29-14 advantage.

The Alumni got a spark midway through the fourth quarter when Don Fricke intercepted a Ron Gilbreath pass at the Varsity 25 and returned it to the one. Vacanti punched it in from there, and the Varsity’s lead was down to 29-20 with 8:50 to go.

The ensuing kickoff, however, sealed the old-timers’ fate. Thornton bobbled the ball at the goal line but picked it up and sped straight up the middle. Thunder’s collision with Ron McDole at the 25 separated the St. Louis Cardinal draftee from his helmet, and Thornton was off to the races. The 100-yard return gave the Varsity its 35-20 final margin.

NOTES: Thornton and Pat Fischer were named the game’s MVPs. … The Varsity’s running game clicked, but the passing game was another matter, with just six of 24 tosses finding the mark. Alumni players said afterward that half-hearted pass blocking by the Varsity’s backs allowed the the quarterbacks to be pressured into making bad throws. … Guy Chamberlin, the 67-year-old former Nebraska All-American, somehow escaped injury when players crashed into him as he sat on the Alumni sideline. His chair, however, broke into pieces. … Carl Samuelson, age 38, was the second-oldest player, a year behind Vacanti. Samuelson, a former Pittsburgh Steeler, was also the heaviest, reportedly tipping the scales at 318 pounds. … Coach Jennings’ assessment: “I thought we played hard and didn't make too many mental mistakes. Assignment-wise, we did all right, but we missed a lot of blocks.” … This was the last NU spring game to pit the Varsity against an Alumni squad. The series ended 8-1-1 in the Varsity’s favor.