The Cornhuskers laid claim to the title of “Champions of the West” as Nebraska capped a perfect season with a 12-0 win over Iowa in Lincoln. It was the 1913 Cornhuskers’ second shutout victory over a Big Nine team.

Iowa entered the game averaging 50 points per contest, thanks to its much-feared “spread play” and a backfield reputed to be the fastest in the West.

But when it mattered most — in the third quarter at the Nebraska goal line — the Hawkeyes couldn’t gain one yard. With Nebraska clinging to a 6-0 lead, Iowa had three tries from the 1-yard line or closer, and three times the Hawkeyes were turned back. On fourth down, Iowa fullback and captain Ralph McGinnis tried a desperate leap over the line but was stopped cold in midair by a crunching hit from Nebraska guard Earl Abbott. “It was Nebraska’s game from that moment on,” wrote the Lincoln Star’s Earl W. Brannon.

The Omaha Bee heaped praise on the offensive work of Nebraska halfbacks Leonard Purdy and Dick Rutherford and tackle Vic Halligan. "Only the goddess of luck prevented the Cornhusker trio from making two more touchdowns," wrote the Bee’s Fred Hunter.

“Nebraska stuck to straight foot ball throughout the crucial contest and it never failed for a minute,” Hunter wrote. “Iowa’s line, although many degrees stronger than reported, was the weakest spot on the team, and it was against that vulnerable point that the wonderful little field general, [Max] Towle, directed his attacks.”

By the Star’s calculations, Nebraska outgained Iowa by nearly 100 yards and ran 73 plays to the Hawkeyes’ 46 while enjoying a 13-9 advantage in first downs.

Nebraska’s first touchdown drive covered 80 yards. The second, which followed a bad Iowa punt, started at the Hawkeyes’ 40 and provided a stirring climax to the Nebraska career of Purdy, the Cornhuskers’ captain.

A kick in the head had forced Purdy to leave the game in the first half, and a leg injury that had sidelined him for several games was still troubling him. But none of that mattered as Purdy first broke loose for 25-yard dash and then finished with a 10-yard jaunt to paydirt, breaking three tackles along the way. It was the perfect ending to a perfect season. 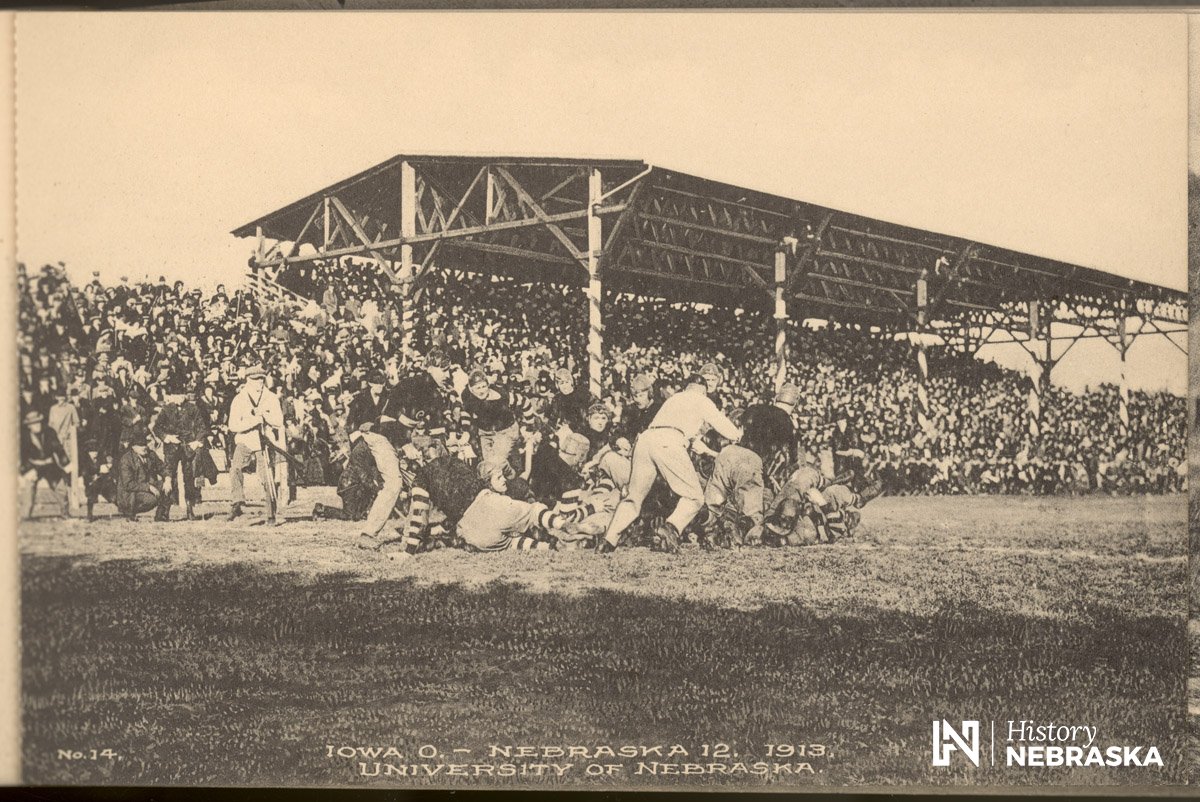 Iowa and Nebraska have been facing off against one another for 127 years. Here's an image from one of our favorites: November 22, 1913.