SLEIGHT OF END
Usher Burdick played right end for Minne­sota. Astonishingly, nobody noticed when he sneaked into Nebraska’s lineup and sabotaged a key play.

In football, there’s offside — and then there’s what Minnesota end Usher L. Burdick got away with against Nebraska in 1904.

Burdick took encroachment to a whole new level on a second-half play against the visiting Cornhuskers. That’s his story, anyway, and we’re sticking to it — with a few revisions.

With underdog Nebraska on the offensive in Minnesota territory, Burdick brazenly decided to line up on the Cornhuskers’ side of the ball as if he were a Nebraska player. Perhaps due to dwindling daylight and soiled uniforms, this went undetected by game officials, reporters and even the Cornhusker players. At the snap, Burdick found a clear path to Nebraska’s ball carrier, John Bender, and threw him for a loss of 10 to 15 yards. End of scoring threat.

The story of Burdick’s chicanery surfaced publicly about three decades later. It was a tale that oozed drama: The play, it was said, happened on the game’s final snap with the Cornhuskers on the cusp of victory just a few yards from the Minnesota goal line. Some versions of the yarn even had Burdick receiving the play call in the Nebraska huddle.

Burdick himself recalled in 1935 that in the “general pandemonium” between plays, “I shifted across and lined up with the Nebraska forwards. When the ball was snapped I tore back and threw the quarterback for a 10-yard loss.”

It’s obvious, however, from the play-by-plays in the St. Paul Globe and Minneapolis Journal that no such thing happened near the end of the game. One sequence of events does jibe with Burdick’s stealthy feat, and it happened about a third of the way into the second half. Nebraska trailed by 10 points and had the ball at about the Minnesota 30, having just been set back 15 yards by penalty:


It’s clear that the truth took a few hits over the years. Whether the embellishment was intentional or due to foggy memories is anyone’s guess. More important is the obvious question: Was the story just a hoax?

That’s possible, but it seems far more likely that the essence of the story was true. By the 1930s, Burdick was a high-profile politician who would serve 10 terms in Congress. What candidate for public office would help spread a made-up story that he cheated at college football?

One thing for certain is that the Cornhusker eleven gave mighty Minnesota a bruising game on that late-October day in 1904. Nebraska would be the only team to score on the Gophers all season. 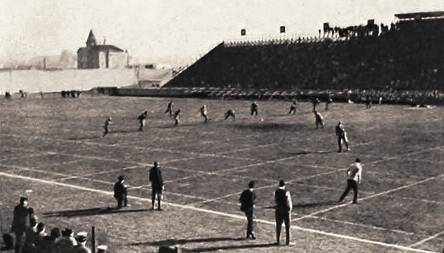 The Cornhuskers took an early 6-0 lead on a 3-yard touchdown run by “Tow” Cotton, capping a 33-yard drive set up by a short Minnesota punt. Minnesota made it 6-6 a few possessions later on a 50-yard run by Fred Hunter. (Each side had a player by that name, by the way.) On their next possession, the Gophers marched to a touchdown from their own 35-yard line, giving Minnesota an 11-6 lead* at halftime.

Early in the second half, the Gophers drove approximately 60 yards to extend their advantage to 16-6. A few possessions later came Nebraska’s scoring threat and Burdick’s infamous act of infiltration. That was followed immediately by a Cornhusker punt and a Minnesota return deep into Nebraska territory. So, even if Burdick’s play wasn’t the game-saver it was later purported to be, it probably did help swing field position heavily in the Gophers’ favor.

Their backs to the wall, the Cornhuskers gamely fended off a series of Minnesota scoring threats, thanks in part to Gopher fumbles. Finally, Nebraska got the big break it needed: The Cornhuskers’ Hunter blocked a Minnesota field goal attempt, and Bender sprinted 65 yards with the ball for a touchdown (or 80 yards or 55 yards, depending on your source).

Nebraska had closed the gap to 16-12, and a few minutes remained. A touchdown would win the game or a field goal would tie it.* But Minnesota made that four-point margin hold up — quite comfortably, in fact. Try as they might, never again were the Cornhuskers able to take a snap in Minnesota territory — regardless of what we’re led to believe by the dramatized versions of the Usher Burdick story. 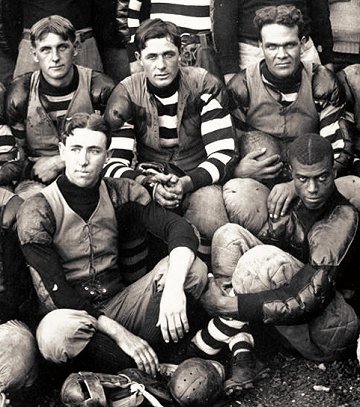 NOTES: It was Burdick’s last game as a Gopher, even though Minnesota still had four games to play. ... Nebraska was outyarded by at least 2-to-1. ... The teams played 35-minute halves. ... One play showcased the best in two opposing players: The Gophers’ Hunter brought fans to their feet with a dazzling 72-yard punt return but was chased down by Bender in spectacular fashion. ... More than 2,000 students greeted the Nebraska players at Burlington Station on the team’s return to Lincoln. ... Minnesota is one of three teams recognized as 1904 national champions.

The account above provides a version of events embellished in a manner fit for Hollywood. (Source: “Gophers Illustrated: The Incredible Complete History of Minnesota Football”)

The Gophers were leading Nebraska 16-12 in their 1904 contest. Darkness was falling on the final moments as the Cornhuskers advanced to the Gopher three. There was time for only one more play to decide the outcome.

Minnesota end Usher Burdick noticed how similar his socks were to his opponents'. In the excitement, between plays, he sneaked into the Nebraska backfield. Amazingly, no one noticed him as they looked to the ground while receiving instructions. After all, didn't they all look like teammates from the knees down? He got the play directly from the captain.

As they lined up, Burdick waited an eternity for the ball to be hiked. At long last it came and he charged the ball carrier. There being no forward progress rules then, he picked him up and started carrying him toward the opposite goal. The Cornhusker was beating him on the neck all the way while yelling "Down!" to stop the play. By the time he was heard he had been taken for a 12-yard loss. The gun sounded to end the game.