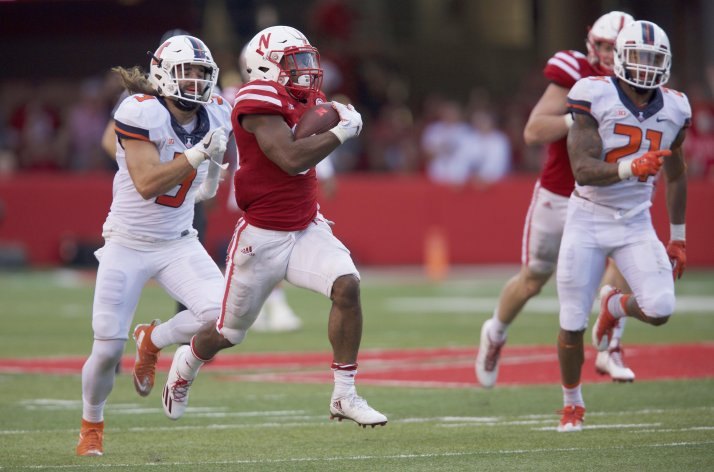 Terrell Newby puts the game out of reach with his 63-yard TD run in the fourth quarter. | Bruce Thorson-USA TODAY Sports

Newby, Huskers Run Past Illini: I-back Terrell Newby took over in the fourth quarter, carrying 16 times for 113 yards including a pair of touchdowns to give No. 15 Nebraska a 31-16 win over Illinois.

The Big Red have owned the fourth quarter this season, and that trend continued with a 21-0 outburst against the Illini in the final period. For the season, the Huskers have outscored their five opponents, 78-6.

Nebraska amassed 423 total yards on 72 plays while maintaining possession for a season-high 38:01.

Courtesy of Huskers.com
Devine Ozigbo runs in the first half.

The best thing about Mike Riley’s second season in Lincoln is his team’s newfound ability to win the fourth quarter.

There have to be serious questions about how the offensive line will hold up over seven more games of Big Ten play.

Ultimately it came down the fact that Illinois wore down and couldn’t keep its defense off the field.

Illinois needs to realize the game is four quarters long.

Of all the injuries on Saturday, the one that worries me the most is tight end Cethan Carter.

On Saturday, the Pipeline stretched from Memorial Cemetery to Memorial Stadium.

At some point, Nebraska has to return to consistently playing championship-level football.

The Huskers have much to prove before we call them a Top-10 team. ... But they’re developing a championship-caliber sense of belief.

The coaches stressed finishing games during the off-season. Now we’re seeing the results.

The Huskers ran the ball twice as many times as they threw it. And they knew, eventually, that the Illinois defensive line would break.