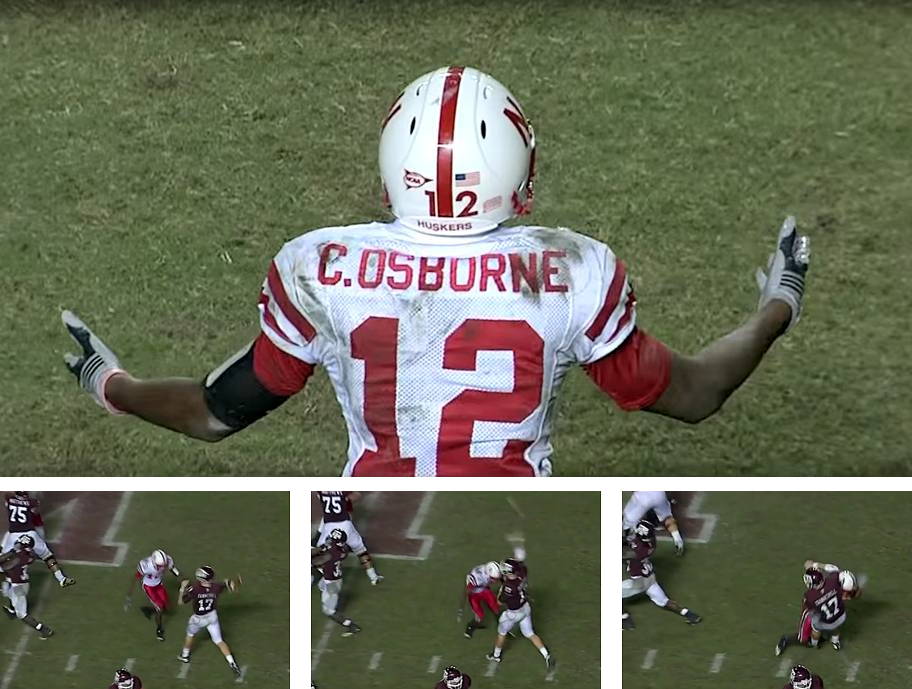 Courtney Osborne pleads his case after being flagged for roughing the passer.

Texas A&M managed one more field goal than penalty-plagued Nebraska could muster as the Huskers lost 9-6 in a defensive battle marked by several controversial moments.

After a 3-3 first half and a scoreless third quarter, Randy Bullock gave the Aggies their first lead with a 28-yard field goal with 14:33 left in the game. Alex Henery tied the score at 6-6 with a 29-yard boot with 8:31 remaining.

However, the Aggies answered with a 19-yard Bullock field goal with 3:02 left. Texas A&M’s winning drive was extended by a roughing-the-passer penalty on Husker safety Courtney Osborne on third-and-11. Instead of 4th-and-11 at the NU 49, A&M had a 1st-and-10 at the NU 34. Cyrus Gray covered 32 yards on five consecutive runs for the Aggies to set up the winning field goal.

Osborne’s penalty was the 15th of a school-record 16 called against the Huskers.

The Huskers had a lot of adversity to overcome - and a lot of it was caused by their head coach.

Pelini will have a hard time living down Saturday night.

The best thing [Nebraska] can do now is try to forget this night.

Can a team keep its cool while its head coach is yelling like a madman on the sidelines? Not on this night.

On this night, A&M's 12th Man wore a white hat and a whistle.

I honestly thought that if there was to be any chicanery by Big 12 officials, it would be more subtle.

The number that mattered most is that for the second time this season the Huskers failed to score an offensive touchdown.

We'll find out how mature this team is over the next two weeks (or maybe one, if it loses to Colorado).

Someone should have texted Pelini to tell him to focus on coaching and lose the sideline antics.

While Les Miles is the Mad Hatter, Pelini is just mad, and his Cornhuskers followed his lead Saturday.

Nebraska played undisciplined tonight, and the Huskers paid the price for it.

Pelini should be mad, just not in Saturday's public-meltdown kind of way.

It was a disaster, really, as if the whole offense literally hinges on Martinez being able to bust off 50-yard runs.