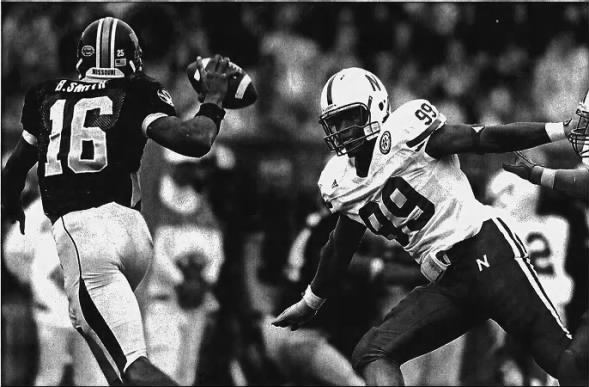 Nebraska rallied from a 21-3 first-quarter deficit to reach halftime tied at 24, but Missouri quarterback Brad Smith was a difference-maker by amassing 480 yards of total offense in a 41-24 Tiger victory.

Nebraska orchestrated a fierce first-half rally by using big plays on offense, defense and special teams to close the opening half tied with the Tigers. Nebraska quarterback Zac Taylor threw a pair of touchdown passes, while Daniel Bullocks blocked and recovered a punt to set up a Cody Glenn one-yard touchdown run. Barry Turner added a sack and forced a fumble by Smith that was recovered by Jay Moore to set up the tying score by Nate Swift for the Huskers in the second quarter.

Midway through the third quarter, the Huskers appeared on the verge of taking their first lead when Taylor found Terrence Nunn on a crossing route on fourth-and-two from the MU 33. Nunn slipped through a tackle and raced down the middle of the Tiger defense inside the Tiger 10, before being being stripped of the ball from behind by Jason Simpson. Missouri’s David Overstreet recovered the ball at the MU 3, and momentum swung drastically from there.

This staff continues to struggle a great deal with game planning and game day coaching.

For the third straight week, Kevin Cosgrove starts with an ineffective game plan, then is slow to make adjustments.

While no one expects the Huskers to pound it for 400 yards a game anymore, the decision to essentially abandon the run was a bit curious.

Mizzou was a loss that was not the toss-up I expected it to be.

Smith was brilliant. His performance was one of the best individual displays I've seen in college football in a long time.

In terms of lost causes, the Huskers pretty much covered the bases.

Missouri fans are hands down the most classless, rude and loudmouth bunch in the Big 12 Conference.