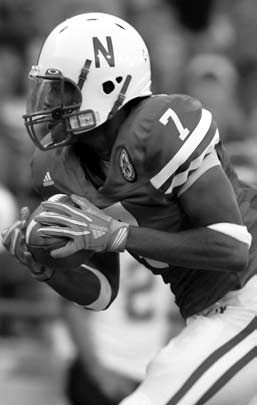 Frantz Hardy had seven receptions for 152 yards in his Husker debut.

Cornhuskers struggle past Maine in opener

In a game that featured one of the top five receiving performances in Nebraska history, it was the Huskers’ defense and special teams that stole the show in a hard-fought 25-7 victory over visiting Maine.

Linebacker Bo Ruud recovered a fumble early in the fourth quarter and picked off a Ron Whitcomb pass and returned it 27 yards for a touchdown to seal the Husker victory with 9:58 left in the game.

The Husker offense was hampered by five turnovers, and Maine’s defense kept the Huskers out of the end zone most of the night. Junior quarterback Zac Taylor completed 15 of 36 passes for 192 yards, including seven catches for 152 yards by sophomore wide receiver Frantz Hardy. Hardy’s 152 receiving yards ranked as the fourth-highest total in school history.

On special teams, Terrence Nunn ripped off punt returns of 62 and 45 yards to help the Huskers find the scoreboard in the first half. He finished with four returns for 135 yards. Cortney Grixby added five for 61 yards to push the team punt return total to 198 yards, just 10 yards shy of the school record.

It is hard to sugar-coat the fact that an inexperienced mid-level 1-AA team took us deep into the 4th quarter. That is frightening.

Terrence Nunn and Cortney Grixby are a major upgrade at punt returns. Too bad they weren't on the team last year. Oh, you mean they were?

Breathe a sigh of relief, and say a prayer for [Zac] Taylor while you’re at it. He’s bound to have better days, but is still very much a product of construction.

As non-remarkable as Taylor’s performance was, with last year’s quarterback we might have lost this game.

I believe the Black Bears believed in themselves and that is the mental lesson to carry onto Wake Forest.

The Huskers averaged 2.9 yards against a lower division team that last year allowed over 400 yards a game on defense!

We knew the play selection would be thin and vanilla for this game, the only question was how much. The answer: Very.

That ‘thud’ sound you heard last night was another group of fans jumping off the Steve Pederson and Bill Callahan bandwagon.