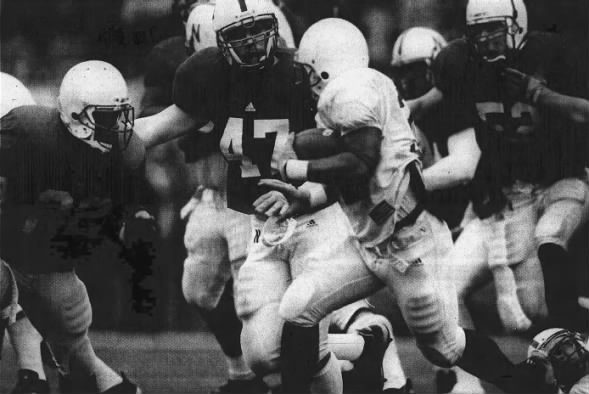 The Red team defeated the White team in the annual spring game, 17-7, as the two squads combined for just 401 yards of offense on a cool, damp afternoon in Lincoln.

The intrasquad spring finale pitted the Reds, with the No. 1 offensive unit, against the Whites, which had the top defensive unit.

After a scoreless first quarter, Adam Ickes’ interception gave the Reds the ball near midfield, and senior Josh Brown kicked a 36-yard field goal after an 11-play, 34-yard drive.

The Whites then went three and out, and Ira Cooper blocked Sam Koch’s punt to set up the Reds just 13 yards from the end zone. Five plays later, senior I-back Dahrran Diedrick scored on a 1-yard run shortly before halftime to boost the Reds’ lead to 10-0.

The Whites opened the second half with a seven-play, 77-yard drive, capped by redshirt freshman Marques Simmons’ 10-yard touchdown run. That made it a 10-7 game.

The Reds responded with a long drive of their own — 81 yards in nine plays, including a 54-yard Diedrick run — ending the scoring for the day with a 13-yard touchdown reception by senior split end Wilson Thomas. The pass came from true freshman Curt Dukes, an early enrollee from Stony Point, N.C.

Diedrick led all rushers with 96 yards on 12 carries, but Simmons wasn’t far behind with 88 yards, also on a dozen totes. Jammal Lord, the heir apparent at quarterback, played only in the first two Red series.

The defense was led by newly arrived junior college transfer Demorrio Williams, who had 13 tackles, including 10 solo stops and two tackles for loss.

Overall the defensive line was good, but that could be because our O-line is struggling.

It would have been nice to see Lord for more than two series. ... He needs the work. But Head Coach Frank Solich needs Lord’s health more.

No doubt Gill and Solich can spend plenty of time settling on their backup quarterback. With the emergence of Lord, the starter has already been decided.

At this point, neither Dukes nor Stuntz is prepared to lead Nebraska to 10 wins