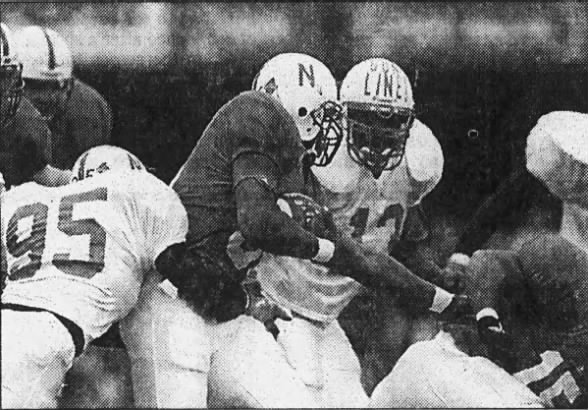 The Whites rallied for two fourth-quarter touchdowns, the last one coming on a 46-yard pass from Brett Lindstrom to Ryan Ommert with 2:24 remaining, to tie the Reds 21-21 in the annual Red-White game.

“I was generally pleased with it,’’ head coach Frank Solich said. “I thought the execution was decent. There wasn’t a lot of mistakes or foolish penalties or things that leave coaches pulling their hair out. That’s not always easy when you’re running in and out as many players as you do in a spring game.”

A one-yard plunge by quarterback Kelly Cook in the second quarter and another by fullback Judd Davies in the third put the Reds up 14-0. With 6:51 remaining in the third quarter, I-back Chris Butler put the Whites get on the board with a 40-yard touchdown scamper. Davies answered on the Reds’ ensuing drive with a 21-yard TD of his own, putting the Reds up 21-7.

Butler, the game’s leading rusher with 118 yards, then capped off a 14-play, 65-yard drive for the Whites with a one-yard TD run. However, Chace Long’s PAT attempt sailed wide left, leaving the score at 21-13.

Five possession changes later, Lindstrom found Ommert for the TD and I-back Tim Reese ran in the two-point conversion, tying the game at 21 apiece. It was the first time since 1950 that the game that marks the end of spring practice ended in a tie.

Courtesy of Huskers.com
Beanie Barnes punts in the fourth quarter.

The best player on the field was Vanden Bosch. He ran right by our starting tackles.

Maybe all-out, full-contract drills, not those sissy non-contact ones, are the key to avoiding devastating springtime injuries.

Judging from his 1- and 21-yard TDs, [Judd] Davies has got the kind of power and speed to become a special fullback.

The bottom line is that Nebraska has the foundation on which to build another run for all the marbles ... if Crouch stays healthy.