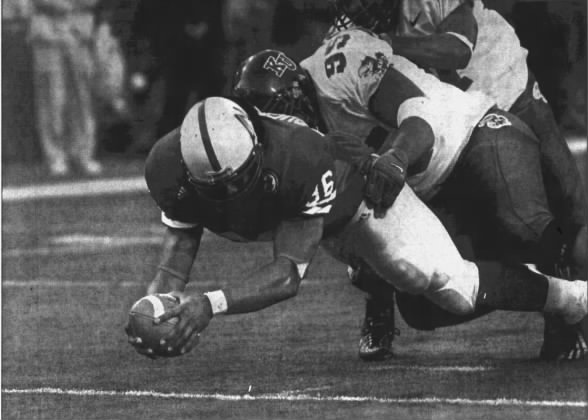 Nebraska, which improved to 8-1 on the season and 5-1 in the Big 12, scored touchdowns on six of its first seven possessions and rushed for at least 400 yards for the fourth time this season en route to its 32nd consecutive win over the Jayhawks (4-5, 2-3).

I-back Dan Alexander rushed for 119 yards Saturday, while Correll Buckhalter finished with 100. The only other time Nebraska had three players rush for at least 100 yards in a game was in 1988 against Arizona State.

I don't know why we didn't throw the ball more just for practice. The game was over by the middle of the second quarter and we kept running.

After a week's sabbatical in Oklahoma, the Big Red Machine got back to smashing mouths and taking names.

What's up with Kansas? That's a team that, even with seven turnovers, played Oklahoma as competitively as the Huskers did on the same field.

On Saturday, Nebraska ran at will. And at Bob. And Roy, and Rupert and anyone else who dared get in their way.

The defense took last week’s beating as a challenge and stepped it up.

Davies could be the most athletic fullback NU has seen — and that's quite a feat.

If you watched five minutes of the game, you got the gist of it.