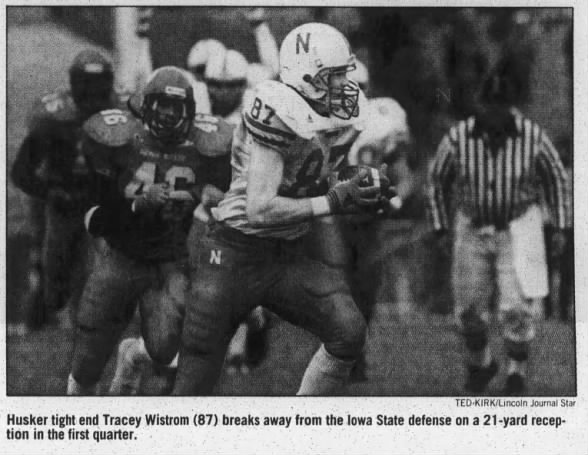 Facing a stiff challenge from previously unbeaten Iowa State, Nebraska erupted for four touchdowns in the final quarter and pulled away for a 49-27 win.

Nebraska turned on the power when it had to as Willie Miller’s nine-yard TD run and Correll Buckhalter’s one-yard TD burst gave the Huskers a 35-20 lead with 9:55 to play.

The Huskers were able to wear down Iowa State on the ground, rushing for 336 yards on 60 carries. Dan Alexander had 96 yards on 21 attempts.

Our offense looks so good at times and disappears at others. I hope our problem is that we play to the level of our competition.

Sometimes a No. 1 team finds out about itself when the bitter wind's in its face and it has to make plays and an opponent and its stadium is feeling the magic.

What's most telling ... was how the Blackshirts stood tall in the teeth of that wind. How, after Rosenfels whipped the crowd into a frenzy, they shut everybody up.

It's the Cyclones' 37 net yards rushing that prove Blackshirts are still alive and kicking.

The only time Nebraska defenders experience three stops in a row is when they're driving in downtown Lincoln.

[Crouch] will carry his team on his newly-muscular shoulders if he must, willing the Huskers past both opponents and their own undoings.

Nebraska did what Nebraska does. It morphed into the Big Red Snowball and turned a close game into another near-miss gone bad for Iowa State.

This was at least a contest. Until the final 10 minutes, neither side led by more than eight points.