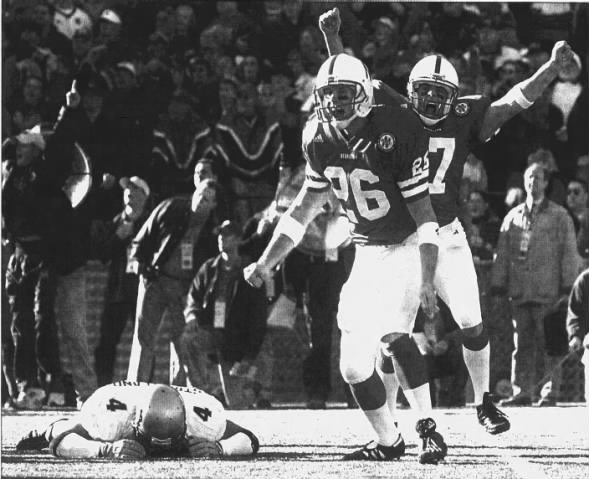 Huskers win wild one with clutch drive and kick

Josh Brown’s 29-yard field goal as time expired lifted Nebraska to a 34-32 win over Colorado in a game that saw four lead changes in the fourth quarter, two of them in the final minute.

The Huskers drove 47 yards in six plays to set up Brown’s kick after CU had taken the lead with a touchdown and two-point conversion with 47 seconds left.

Quarterback Eric Crouch completed four of five passes for 45 yards on the drive. Two of the completions were to Bobby Newcombe, including a 17-yarder to the Colorado 12 with five seconds left to give Brown a more makeable kick.

Early on, it looked like an easy day for the Huskers as they took a 14-0 first-quarter lead. On Colorado’s second offensive play, Carlos Polk intercepted a Craig Ochs pass and returned it 39 yards for a touchdown. Later in the quarter, Randy Stella blocked a CU field goal try, and Chris Kelsey returned it 43 yards. Crouch ran 27 yards for a TD on the next play.

Fumbles, penalties, blocked kicks, missed FGs — we just don't execute very well. It hurts to say this but we just have a good and not a great team.

Crouch put together a clutch drive, with one timeout left, that his boyhood idol, John Elway, would have been proud of.

After the previous four down-to-the-wire battles the past four seasons, we should all be used to the high drama these border rivals produce. But this one will be hard to top.

For too long the Buffs' kicking game has been inconsistent and incompetent, if not embarrassing.

Why is it that Barnett has two defensive coordinators and but no coach in charge of special teams?

I will say this about Barnett. He is the man for the job. ... But on this day, he was to blame for his team losing.

After Eric The Red went up top to drive NU to the game-winning score, it was clear how important it is to have an offense as nicely-balanced as a new set of Goodyears.