The sixth-ranked Huskers picked up their third straight bowl victory as Benning rushed for 95 yards and scored on touchdown runs of 33 and six yards on his way to MVP honors. Frost completed 11-of-22 passes for 136 yards while rushing for 62 yards and two touchdowns.

After the Hokies jumped ahead 7-0 on a Jim Druckenmiller touchdown pass, the Huskers responded on their next possession as Kris Brown’s 15-yard field goal early in the second quarter. Nebraska took a 10-7 lead on its next possession as Frost capped a three-play, 45-yard drive with a five-yard touchdown run.

The Nebraska defense pushed the margin to 17-7 after rush end Mike Rucker sacked Druckenmiller and forced a fumble that defensive tackle Jason Peter picked up and raced 31 yards for a touchdown.

The Hokies would not go away quietly, though, as Druckenmiller threw a pair of touchdown passes, closing the gap to 24-21 midway through the third quarter. Nebraska finally extended its lead as Benning’s six-yard touchdown gave Nebraska a 31-21 lead heading into the fourth quarter.

In the final quarter, the Husker defense held the Hokies on a pair of drives in NU territory, while the offense added a Brown 37-yard field goal and a 22-yard touchdown run by Frost with three minutes left, clinching the win. 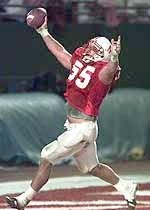