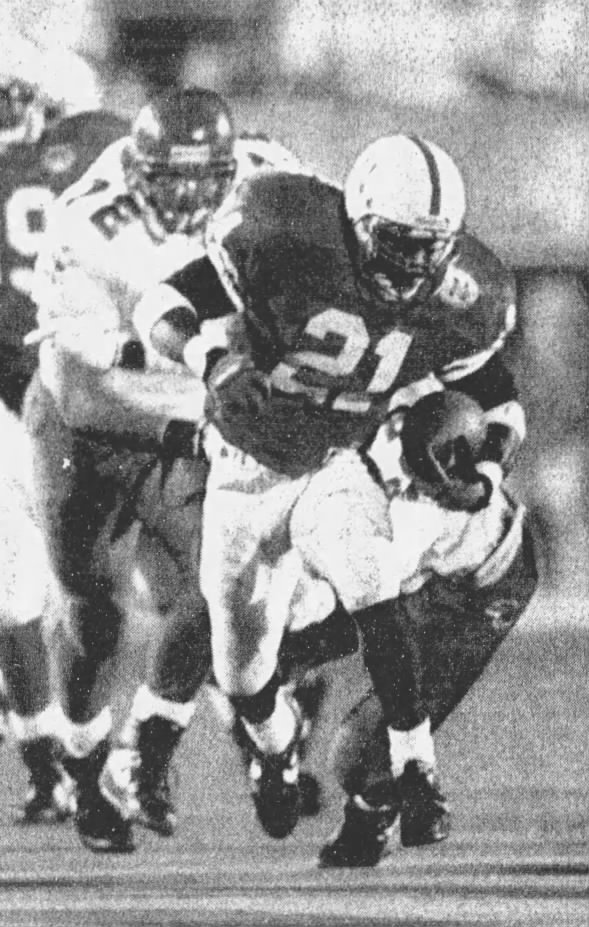 Derek Brown breaks free for a 17-yard gain late in the first quarter. He gained 110 yards in the first period alone and finished with 156 on 15 carries. · The Lincoln Star · Newspapers.com

The No. 7 Huskers, again in front of a national television audience, came out strong and for the second week in a row destroyed a Top 20 team in defeating conference-leader and 13th-ranked Kansas, 49-7.

The Huskers took sole possession of the Big Eight Conference lead as they rushed for 351 yards and racked up 533 total offense yards against KU’s top 20 defense. Freshman quarterback Tommie Frazier completed 6 of 11 passes for 161 yards and three TD passes, including two to tight end Gerald Armstrong. Armstrong was six-for-six on receptions-for-scores to tie an NCAA record before he caught a third pass and did not score.

Derek Brown had 156 yards rushing while his “We-back” counterpart Calvin Jones rushed for 107. KU was held to 128 on the ground and 145 in the air.

Nebraska had no turnovers for the fourth straight game, while KU gave up two interceptions, one to Tyrone Byrd for a 30-yard touchdown return and the other to Kenny Wilhite.