South Carolina’s Jones Andrews makes a catch on his back as Steve Forch defends. · The Greenville (S.C.) News · Newspapers.com 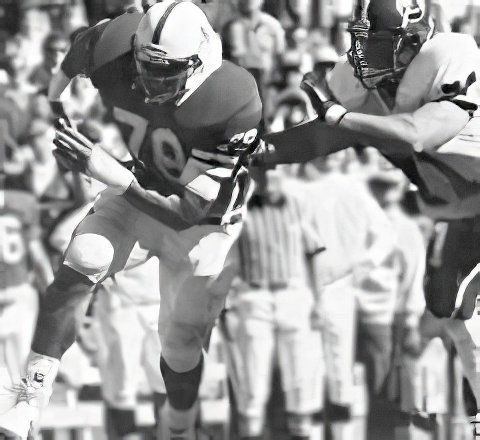 South Carolina scored twice within four minutes to take a 21-13 lead in the third quarter, but the Gamecocks netted only 9 offensive yards after that and second-ranked Nebraska rallied to post a 30-21 win.

The rally started with an 18-play, 96-yard, 9:01 drive in which quarterback Steve Taylor was lost to a shoulder injury. The go-ahead touchdown was set up by a Gamecock fumble, then Mark Blazek’s late interception set up the clinching field goal.

Keith Jones rushed for 129 yards and was named Big Eight offensive player of the week.

H’MAX NOTES: Clete Blakeman finished the game at quarterback after Taylor’s injury, which came on a hit by safety Brad Edwards on the final play of the third quarter … The game was close even though the Huskers enjoyed a nearly 2-1 advantage in time of possession and a 406-242 edge in total offense. … For the second time in four games, the Blackshirts held an opponent to negative yards rushing (-14). … The game marked the debut of the redesigned Herbie Husker mascot.