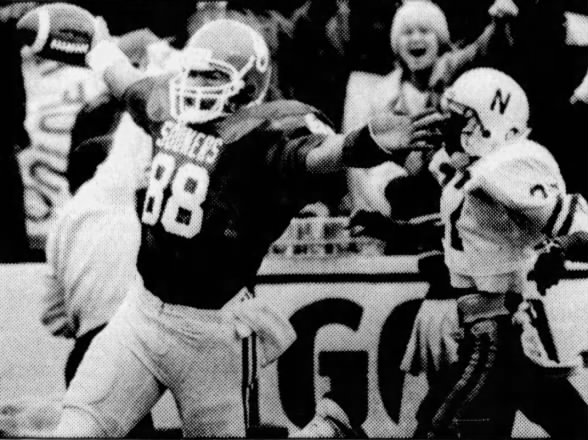 It’s all Sooners in showdown for Big Eight crown

Oklahoma’s outstanding defense stifled Nebraska’s offense for almost the entire game and turned away the Huskers’ only two offensive scoring threats inside the Sooner 10 as OU topped Nebraska, 27-7.

The Huskers’ own fine defense had not given up more than 157 rushing yards in 10 games, but yielded 423 to the Sooner wishbone, while Oklahoma held the Huskers to a season-low, by far, 224 total offense yards.

With an Orange Bowl bid and a likely shot at a national championship at stake, the Sooners set the tone early with an 88-yard touchdown run by tight end Keith Jackson with scarcely three minutes gone in the first quarter.

Only defensive tackle Chris Spachman kept the Huskers from being shut out for the first time in 147 games when he intercepted a fumble and returned it 76 yards to score with 26 seconds left. It was Spachman’s second interception return touchdown of the season. At times, it looked like the Cornhuskers had forgotten how to tackle, which, of course, wasn't the case. The problem was Oklahoma, and there was nothing Nebraska could do.

The better team won, but the Huskers couldn't get a break. This, as OU Coach Barry Switzer said, was just the Sooners' day.

The Sooners had only modest respect for the '85 Cornhuskers. And they certainly didn't fear them. Now, of course, we know why.