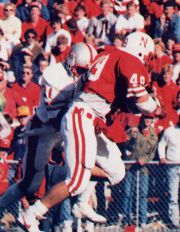 Lobos give
Huskers
a tussle

New Mexico may have been an unknown quantity when it came into Memorial Stadium, but the Lobos quickly got Nebraska’s attention by driving 83 yards in six plays after the opening kickoff.

Down 7-0, Nebraska rallied for a hard-fought 38-7 win, but not before giving up 379 total yards. Paul Miles filled in at I-back for the injured Doug DuBose and rushed for a career-high 189 yards in his first career start.

For the third consecutive game, Husker defenders intercepted four opponent passes. But the Huskers lost four of their eight fumbles against the Lobos.