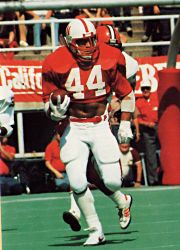 Nebraska scored on nine of its first 11 possessions and rolled to a 63-7 non-conference win over Syracuse.

The Huskers were again led by All-America I-back Mike Rozier, who rushed for 142 yards and two touchdowns against the Orangemen.

About the only negative note for the Huskers came with 1:42 left in the first half when Syracuse safety Ron Hobby intercepted a Turner Gill pass, ending Gill’s Nebraska record of 125 consecutive passes without an interception, dating back to the 1982 Colorado game. Gill’s mark was just 17 short of the Big Eight record.