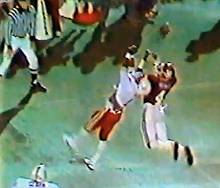 Cornerback Neil Harris batted away a fourth-down Danny Bradley pass intended for Buster Rhymes in the end zone with 32 seconds left to preserve Nebraska’s 22nd-straight victory and nail down a third-straight unbeaten Big Eight title for the Huskers.

Oklahoma had moved to second-and-one at the Nebraska 1-yard line in the final minute, but a motion penalty pushed the Sooners back to the six, and after Bradley was sacked for a 3-yard loss by Bill Weber, Harris knocked away two-straight passes to complete one of the greatest defensive stands in Nebraska grid annals. Led by Mike Rozier’s 205 rushing yards, the Huskers came from behind twice to get the win.

Rozier finished as the all-time leading rusher in the Big Eight with 4,780 yards and became only the second player in NCAA history to top 2,000 yards in a season with 2,148.