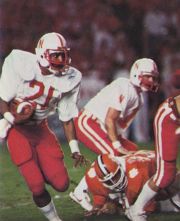 Nebraska’s quest for a third national championship came mighty close in 1981, but the Tigers of Clemson could not be denied in an exciting, hard-fought Orange Bowl game.

As had happened to the Cornhuskers in 1970, the stage was set for a charge to the top by events earlier on New Year’s Day, 1982. Clemson, undefeated Atlantic Coast Conference champions and ranked No. 1, dug in for the challenge from Big Eight champion and No. 4-ranked Nebraska. Meanwhile, Texas and Pittsburgh were giving the Cornhuskers their chance at No. 1. Pitt beat No. 2 Georgia in the Sugar Bowl and Texas toppled No. 3 Alabama, 14-12, in the Cotton Bowl. Would 1970 repeat? Could No. 4 Nebraska knock off No. 1 Clemson and claim the title?

It was not to be as the fired-up Tigers capitalized on their own outstanding abilities and Cornhusker miscues to win their 12th consecutive game, 22-15, and earn a well-deserved national title.