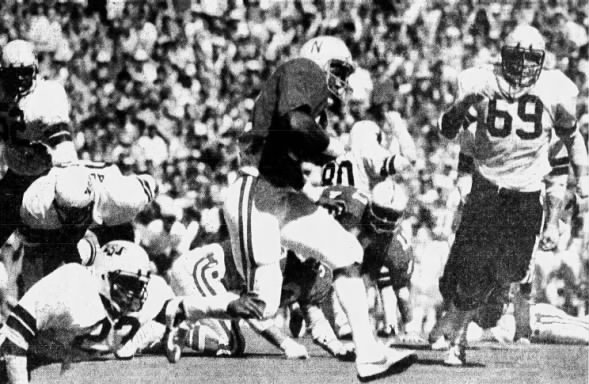 First half a struggle, then Huskers roll

Things were a little bit unsteady at halftime as Nebraska and Utah State were tied 14-14, but in the second half, it was the Huskers all the way as the NU squad beat the Aggies 35-14.

Nebraska had entered the season with somewhat of an unknown at quarterback, but by the time Jeff Quinn was finished, Husker fans saw a Nebraska quarterback rush for over 100 yards for the first time since 1964. Quinn finished with 112 yards.

The Husker offensive line was tremendous as it carried NU running backs for 455 yards. The leading rusher for the Cornhuskers was senior I.M. Hipp, who got 167 yards and scored three times. It was the first appearance of the transfer star Jarvis Redwine, who carried the ball 10 times for 91 yards.

In the first half, the Huskers’ Blackshirt defense appeared to be shaken some by the fine play of Utah State senior quarterback Eric Hippie, but after a halftime adjustment, NU shut out the Aggies in the second half.