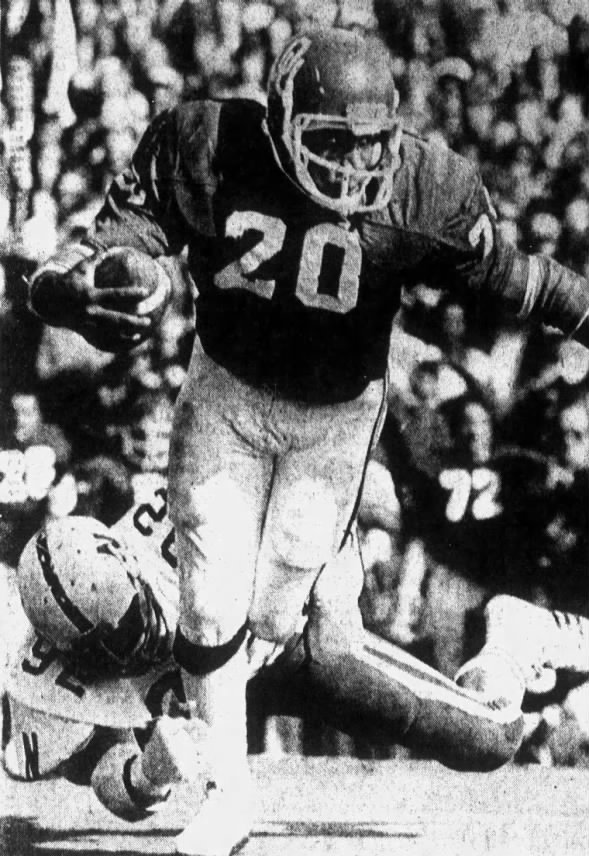 A Husker dives at the feet of Billy Sims as the Oklahoma tailback picks up some of his 247 yards. · The Kansas City Star · Newspapers.com

Hopes for a Big Eight title and national championship were dashed when Nebraska lost a hard-fought battle to Oklahoma, 17-14.

Tailback Billy Sims raced for 247 yards against the Blackshirt defense, ranked No. 1 in the country against the rush.

The Huskers led at halftime, 7-3, scoring on an 11-yard pass from Jeff Quinn to Jarvis Redwine. But then the Sooners came up with two big plays to put the game on ice: a 58-yard touchdown pass from J.C. Watts to Forest Valora and a 71-yard run by Sims, setting up a short TD run by Watts.

Nebraska’s final score came on a trick play, when Quinn left the ball underneath center Kelly Saalfeld and guard Randy Schleusener picked it up and rambled 15 yards for a touchdown.