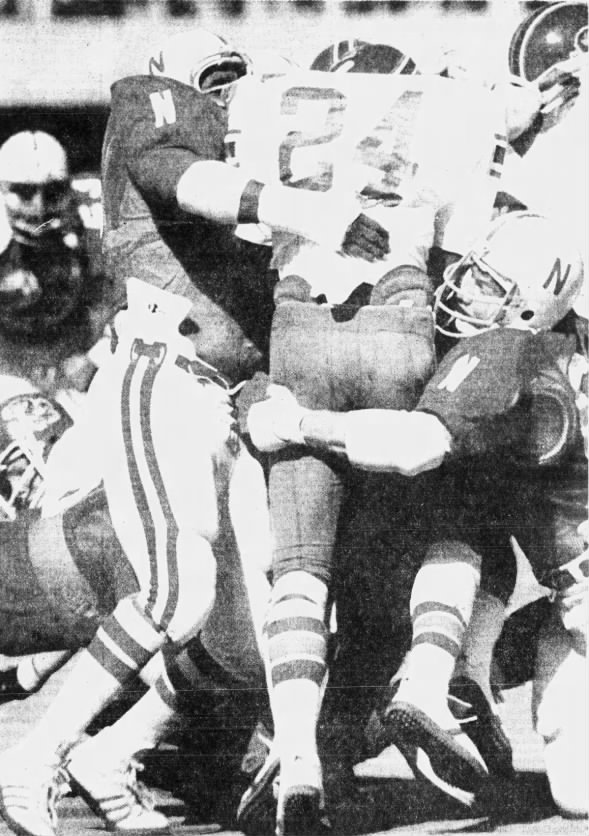 Kansas fullback Harry Sydney is hit high by Oudious Lee and low by David Clark during the first half. · Lincoln Journal Star · Newspapers.com

It was Homecoming for Nebraska, and the Huskers were impressive as they opened Big Eight Conference play with a 42-0 win over the Kansas Jayhawks.

It took three Dean Sukup field goals of 36, 41 and 27 yards and a second-period, 54-yard touchdown run by Jarvis Redwine to send Nebraska ahead at halftime 15-0.

In the second half, the Cornhuskers exploded for 27 points. Redwine, now one of the country’s premier running backs, rambled for 157 yards and sat out a good share of the second half.

As Redwine rested, the Jayhawks had to contend with Craig Johnson. Johnson scored on runs of one and 94 yards, and the 94-yard run from scrimmage was the longest in the history of Nebraska football.

The Nebraska defense was like a brick wall, allowing Kansas only 8 first downs, 20 yards rushing and 59 yards passing.

Tight end Junior Miller again was on the receiving end of a Tim Hager touchdown pass, this one for 24 yards.